It is not very hard to get lost in a maze of youtube clips from Wisconsin running backs from the past. Ron Dayne, P.J. Hill, John Clay, and even more recently Monte Ball. The thing with Wisconsin is that it doesn't really matter who is wearing the jersey that particular year. The team always looks more or less the same. We have been conditioned to expect a certain look, a certain vibe from the Badgers. But what happens if you take the architect of that look and transplant him 600 miles to the east. Does that team take on the look and feel of his previous work? After last weeks humiliating loss at the hands of the Youngstown State the early returns are an emphatic no. On the surface the offense looks the same, they run the same plays and try to play the same way but they are still a ways off.

They didn't last year finishing last in the nation in sacks allowed with an astonishing 63 and they were also last in the nation in TFL's allowed with 110. By no stretch of the imagination was Pitt even a competent offensive line last year. They brought basically the entire two deep from last season minus Lucas Nix and Jordan Gibbs. But there were questions in august about whether Pitt had enough linemen to fill a two deep, or if they had the depth to survive an injury. After one game it is hard to tell if Pitt is actually better. And that is going to be the issue for Pitt on Thursday.

Paul Chryst builds his offense off the running game. That has always been the case at Wisconsin and he will certainly try to make it the case in Pittsburgh. The base running play for the Panthers is power. It is the most elemental of Football plays and Pitt ran it, by my count, 8 times in the loss to Youngstown State. But it didn't really work like it should have, and the two reasons above are the biggest reason why.

The beauty of Power is that it can be run out of any formation. Power I, single back, shot gun or in this game for Pitt in a one back set with two TE's. 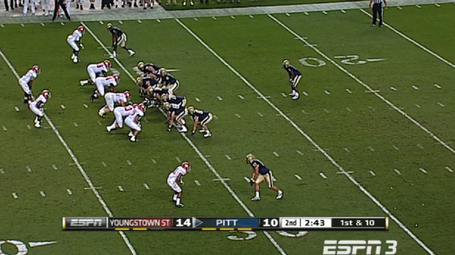 This play is already a win for Pitt as they have 7 blockers going against 7 men in the box. It should be a huge play. 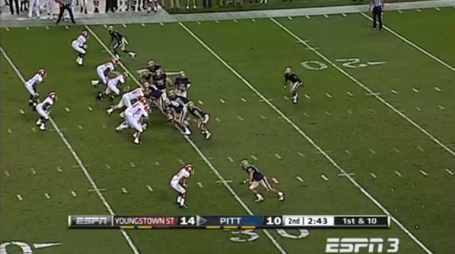 At the snap you see both guards rise up to pull and lead around end while the playside blocks down and the backside tackle reaches to cut off the pursuit of the backside DE. 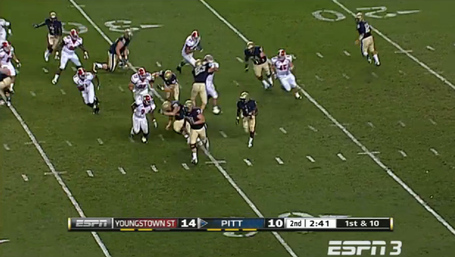 The reason that Pitt pulls two guards rather than one is so that the second man can cut off the flow of the playside linebacker which you can see him doing (the linemen diving at the feet of the linebacker behind the lead guard. This play should be huge. The edge is sealed and Ray Graham has space for days. 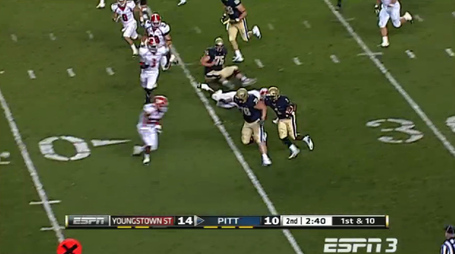 All that he needs is for Corey King to pick off this little DB and he is off to the races as he was so often a year ago. 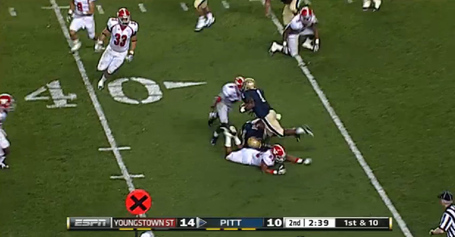 What happens instead is that Youngstown State's corner blew up the block, made a pile, and Ray Graham lacking the short area quickness that made him so good last season and do nothing but trip over the pile. This play wound up being a 9 yard gain which is not nothing, but this was one block away from being a monster play. And Pitt couldn't get it done. Its not even a question of running the play right, as it was run almost perfectly.