As of this week Brendon Kay is the national leader in completion percentage, he is also in the top 20 for yards per attempt, and passer rating. Unsurprisingly the news has been treated, by some UC fans, as an occasion to bitch about how he isn't better.

How would a person complain about something that is obviously a good thing? By arguing that what Kay should really be doing is chucking the ball as far down field as he can possibly throw as often as his shoulder will allow it. Doing as such would certainly create more big plays, for both teams, and more excitement for the fans, of both teams but that's not really who Kay is. That boom and bust style was all Munchie, for better or worse, but that is not really how Kay plays.

The real flaw in the argument for Kay pushing the ball down field, or throwing intermediate routes more often is that with each successive yard down field the expected completion rate falls in lockstep. intuitively that makes sense, it is easier to hit a target five yards away than it is hit the same target placed 25 yards away. The rise in the degree of difficulty means fewer throws will hit the target. But there is an added component to the equation, and it has less to do with how far the ball is thrown, but where. 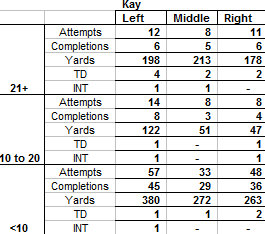 Note: This data is through 8 games, I still have to chart the SMU game at some point.

Note just how many of Kay's passes are to the areas of the field outside the hash, 150 of his 199 pass attempts. Yes a great deal of his passes are short, but that isn't really a problem, or all that dissimilar to his peers. 64.3 percent of A.J. McCarron's passes traveled less than 10 yards. The same figure for Johnny Football is 67%, for Teddy Bridgewater its 58.3%, for Marcus Marriota it's 64.9%. In that context Kay's throwing 69.3 percent of his passes for less than 10 yards is a little high, but its not an outlandish percentage.

All of this is interesting for providing background and context to what Kay has done this season, but if you really want to visualize Kay's game thinking in basketball terms helps. If you are an NBA fan who is heavy into advanced metrics go ahead and skip the next paragraph, for the rest of you onward.

In the NBA, with the court configured as it is, two shot types are considered to be far superior to the others; the three pointers from either corner and shots at the rim. Corner threes are almost 2 feet shorter than the regular three point line and are correspondingly made at a higher clip. Shots at the rim are what they have always been, easier than shots not at the rim. To next generation NBA types anything other than a rim attack or a three point shot is seen as sub optimal at best, "Oh my God you are single handedly killing this team please stop shooting for the remainder of your life" at worst. Old guys lament the lost art of the mid range game, but its gone for a reason, its a dramatically less efficient way to score the basketball.

What makes the passes in the intermediate area (10 to 20 yards) so difficult and fraught with peril is the way coverages work. There are always two levels to read, but the divisions are not always clear. The fact that the safeties and intermediate defenders are equally capible of defending the nebulous area between blocks of coverage makes it especially dangerous.* Given the time a QB has to read a defense before making a decision, generally 1.5 seconds 2 at most, it is very difficult to get a clear read about what exactly is going on between the hashes.

*Incidentally that explains why Munchie was so often boom or bust, he loved to work the middle, for better or worse

For the most part Kay stays out of the middle and works where he more or less knows what coverage he is going to get. Because he doesn't take a lot of chances he limits his risk. Even on his deep throws they aren't reckless for the most part. It is that reason why he is so accurate throwing the ball down the field, because Kay only pushes the ball when the match ups and coverages suit him. Thats the reason he is completing 55 percent of his passes over 20 yards down field, its not just that he is accurate with the football.

In general if the play isn't to plan Kay will usually check down and live another down. There have been a half a dozen occasions over the last three games where the Bearcats have set up big shots down field off play action where Kay checked down because he didn't like the coverage. He chose to make the safe play rather than the spectacular. That isn't thrilling football, but it is smart and efficient, not to mention winning football.