Cincinnati fans are being buried under an avalanche of innuendo in regards to Big 12 expansion.

The reason to bring this up is that apparently UC coaches are telling recruits they are Big 12 bound. 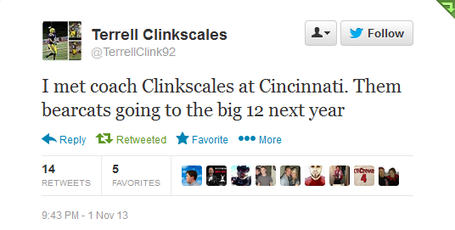 via Cincy on the Prowl

Color me shocked that a coach would fudge the truth about future conference affiliation to nab a recruit, in this case the best JUCO defensive tackle in the land. It has happened before, and will happen for as long as realignment remains a thing, which seems to be in perpetuity.

There is the usual collection of twitter nonsense from guys like Mhver3, Greg Swaim and the artist formerly known as the dude of West Virginia. Those guys are good to follow for the unintentional comedy, and because they are talking about expansion when no one else is. If they say it is happening cautious optimism is best.

As we all know the Big 12 offices are based in Dallas, but run through Austin. On that front there is nothing from Texas. All of the noise is coming from West Virginia at the moment, which makes sense because the Hurricane of rumors currently has Oliver Luck in it's eye.

After all he is the man tapped by most to replace the venerable DeLoss Dodds as the University of Texas's athletic director. At this point he is the last guy standing

The West Virginia athletic director, who possesses a UT law degree, interviewed strongly in a lengthy meeting with the eight-member advisory committee. Arizona State AD Steve Patterson was scheduled to interview Sunday. Sources indicated that an official announcement could come soon, but might wait until after Texas’ game Saturday at West Virginia to avoid an awkward situation. Announced or not, Luck will be the center of attention.

Bearcats interest in Luck should be two fold. There is the long held assumption (probably correct) that the Big 12 office is based in Dallas but run from Austin. As such the man who will occupy Dodds chair will have immense power to shape the direction of the Big 12.

If you posses a pro expansion mindset then you should be rooting for Luck to get that job. He just seems more likely to listen to the pleas of Fox Sports for more inventory and new markets to tap than the other candidates. Because of his experience in the upper reaches of the NFL management and as the CEO of the Houston Dynamo in MLS. This is purse speculation on my part, but I would think that experience would lead to him acquiescing to the needs and wants of the Big 12's network partners, where as Dodds has been firmly against expansion beyond the replacements for Missouri and Texas A&M.

My guess is that there are a lot of bars that have to be cleared to get the Big 12 to the point that they actively talk of expansion. But if they get to the point where they want to go to 12 or 14 the Bearcats are probably in. As it turns out the University of Cincinnati ticks an awful lot of boxes.

I’ve been mentioning Cincinnati as a strong Big 12 expansion candidate for awhile, but it wasn’t until constructing this index did I see how the school really does hit virtually every metric that the conference should be seeking. Among the Group of Five schools, its Football Brand Value is strong with multiple BCS bowl appearances and consistent performances over the past several years despite a number of coaching changes. The state of Ohio is a football recruiting powerhouse with only one in-state power conference competitor (albeit a massive one in the form of Ohio State). The school’s academics are solid, it has a great basketball history and its location is in a major market with probably the best geographic bridge to West Virginia of any viable candidate. The only question with Cincinnati is whether it can really perform any better on-the-field that it already has in football during the past few years. Still, that’s a minor issue compared to how the school has created a consistently competitive football program. So, if the Big 12 were to expand today, it’s clear that Cincinnati and BYU have a huge gap over the rest of the field. Whether that type of expansion would be compelling enough to the Big 12 to make a move at all is still an open question.