Every playcaller has a play that they love. A situational play that they go to when they need a first down, or a big play, or a negative play on defense. This series is all about identifying and examining those schemes for each of the Bearcats upcoming opponents. Todays edition, the Purdue Boilermakers

Darrell Hazell comes from the Mid American Conference. MACtion does not, in general, conjure up images of quarterbacks crouching under center, or a tailback rounding the corner behind a pulling lineman or a lead full back. "The Spread" being the great equalizer for teams with less raw talent competing against the bigger, faster and more talented teams it isn't a total shock that the MAC was the second conference* to embrace "the spread" enmass.

*The WAC is unquestionably the first.

The Golden Flashes certainly spread things out, last year in particular, but at heart they were a team that wanted to run the ball, and whats more they wanted to run the ball with power. How else can you explain this sentence. "Trayion Durham was a 1,000 yard rusher." An offensive coordinator does not hand the ball off to Durham enough times to gain a 1,000 yards on accident. From a macro perspective, knowing that Hazell was plucked from the Tressell ball tree that isn't a surprise. It also goes a long way to explaining why Hazell went out and got John Shoop to be his offensive coordinator, a guy who wasn't even in coaching in 2012**

Shoop has an extensive NFL background. In fact he has spent far more time in the NFL ranks than in the college. The biggest tell in his playcalling is how he deploys formationally. There is always a running back (ocassionally two) there is always a tight end (occasionally two or three). His running game isn't that different from a lot of transplanted NFL coaches. He has the same four base concepts that almost every coordinator in has; inside/outside zone, power, counter. But his wrinkle is one of my favorite run game concepts, the toss power sweep.

Here is the diagram of the play. 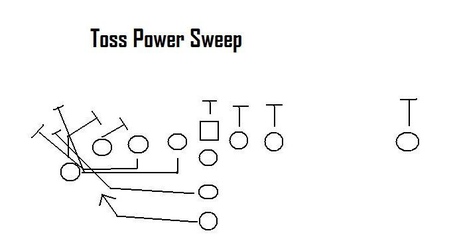 The thing that makes this play so effective is leverage. The leverage that the tight ends have on the two outside defenders, the SAM end and the SAM linebacker is the key to the play. Leverage is what allows a 250 pound tight end to bury a 280 defensive end down the line. That act in and of itself is what allows the play to hit as quickly as it does. In half a second the running back has 750 pounds of lead blocker running down hill at secondary players. At that point they are more obstacles for the defenders than actual blockers. Getting in the way of a DB is as good as blocking them, if you happen to be 300 pounds. The running back's key is to read the block of the guard, the second man through. If its blocked well the only thing between the back and a big gain is the single high safety, (and it will always be a single high safety).

This play is nothing new. Its genesis is in the infamous Packer Sweep of Vince Lombardi. That play has been around for 60 years now, though no one runs it exactly like Lombardi did. That play is far too slow to be effective against modern defenses. The handoff of the original was replaced with the simple toss to the halfback, saving crucial fractions of a second.

The antecedent of the Lombardi sweep is the bucksweep, the most important branch in the Wing-T family. The bucksweep has had a rennosance of late with some of the most forward thinking offensive coaches in the game. It is a concept that Hazell's staff used a bit at Kent State, and one I would expect Shoop to break out occasionally this season. In the right situation, against the right personnel it can be devestating.