Way, way back in May I had an idea to look at Art Kaufman's defense as sort of a play with three acts. Like so many of my ideas it was grandiose, ambitious and needlessly complicated. Unsurprisingly I never made it past act 1. But I have watched alot of Texas Tech games this month, and I think I have a pretty good handle on what Art Kaufman wants to do.

Share All sharing options for: Film Study; The Over/Under Front and Art Kaufman

Lets start with the basics. Like John Jancek, Tim Banks and basically every defensive coordinator except for Bob Diaco in the last decade Kaufman's base defense will be the 4-3. But not all 4-3 defenses are created equal, they all set out to do the same things (cover every gap against the run first, defend the pass second). But there many different ways to align your front to do those things.

The 4-3 base is not something that you will see an awful lot from the Bearcats this year, or any defense at all for that matter. Its simply the base from which the Bearcats more common fronts evolved. This is how the 4-3 works in terms of gap responsibility.

This is the way the 4-3 was played from the 50's when Tom Landry is credited* with inventing it right on through until the mid 80's when Jimmy Johnson changed the game. What changed the game then is the same force that has driven most of the defensive innovation of the last decade, (3-3-5, 4-2-5 etc) option football.**

* As with most things in football, "inventing" and "stealing" are synonymous. As Chip Kelly is fond of saying, if you weren't in the room with Amos Alonzo Stagg you didn't invent anything. (paraphrasing)

Jimmy Johnson changed his approach to defense at Oklahoma State where he had to face perennial option football wrecking balls Oklahoma and Nebraska. The key to shutting down those option teams is creating upfield pressure to disrupt blocking schemes. Upfield pressure is still the way to disrupt an option offense. To do that Johnson began tinkering with his fronts. What he came up with became known as the Miami 4-3, more commonly known as the over front. Because Johnson took his principals to Miami, and he had a completely different class of athlete that supercharged his scheme. 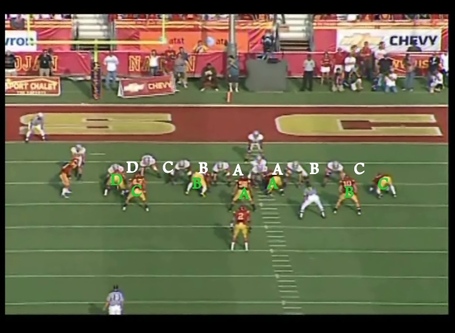 The defining characteristic of the over compared to its most common counterpart, the under, is the way the defensive line shifts. In the over or under front there will always be a tackle on the center, usually shaded to one side. Without getting too embroiled in details this is how the defense generally works. 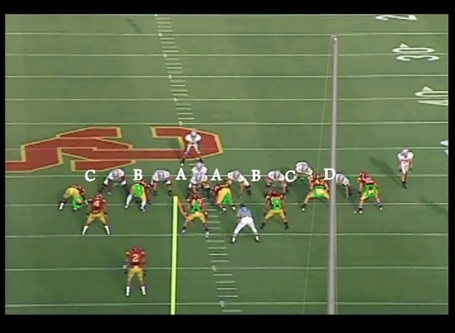 The under shifts the strength of the defensive front to the weak side, and to compensate brings a linebacker down to the line of scrimmage and aligns it to the strength of the offensive formation. The same basic rules apply to the defense in either front. Linemen attack their assigned gaps, linebackers have loose gap responsibility, but must flow to the ball as fast as possible.

For the most part Kaufamn employs an over front. I didn't bother to chart the plays in any of the four games that I watched, but my estimation would be that 70 percent of the time Texas Tech aligned in an over front, and that is regardless of personnel groupings. They did occasionally use an under, as no one in football these days plays just one front all of the time. And there were a handful of quirky looks that I might spend more time with later, but these are the basics.

In a lot of ways this post is an addendum to the post on gap control and verticality from early July. The way Tim Banks and John Jancek applied their defensive line should actually be helpful in transitioning to the new scheme. Both require players that are fast for their positions, the better the athlete the better they fit the system. In this respect the guys that Kaufman inherited are perfectly suited for what they want to do. But the best thing of all is that this is far less complicated. All the defender has to do is attack the gap they occupy. It would also explain why the defense is loving the new approach, it lets them be aggressive.