Five Ideas For The Rennovation of Nippert Stadium

The Cincinnati Bearcats are 22 days and (at the time of this writing) 20 hours away from embarking on the final season before Nippert undergoes a massive renovation. Here are some ideas to perfect the already splendid plans for the grand old lady.

Share All sharing options for: Five Ideas For The Rennovation of Nippert Stadium

Nippert Stadium has a pedestrian bridge. A fact that is known to every single Cincinnati student, and approximately two people outside of Cincinnati. It is one of the more unique elements of Nippert, and but there is nothing to highlight it. What I am suggesting is simple, banners. Every basketball arena in the country has banners hanging from the rafters to display the history of the program, some hang them on the walls. This practice is not nearly as common in football, for the simple reason that in the vast majority of football stadiums offer no place for such things. But Nippert is different, the structure that supports the bridge and holds up the east side of the score board could easily be used to hang banners celebrating the UC's history. The conference wins, the bowl games, the national rankings. All of which should be acknowledged, none of which is currently. Its not like UC really has a better idea than that, they currently throw up a 45 foot tall inflatable bearcat to hide the supports. Cover that supporting structure in banners and you create a new focal point of the stadium. How cool would it be to see UC take the field every game with the history of the program looming behind them? You can't tell me that wouldn't be awesome.

I would put them for sure on the face of the as yet unnamed structure on the west side, and I would remove the Ring of Honor* from the east side and put ribbon boards on the east side as well. The bowl appearances should come off the face of the Bearcat Lair as well. I would even beg CCM to allow the athletic department to instill ribbon boards on the Dieterle Vocal Arts Center. Maybe across the white layer of stone that divides the building into top and bottom. Why? Because they would basically triple the available amount of ad space that UC can sell. And because they are cool, and would work wonders with the less ear splitting new audio visual system.

Take Down The Field Goal Nets In The Horseshoe End

They just put them up this year, but they should be taken down. Footballs are meant to be fought over by drunk college students, or is this not America anymore.

Build Lucy The Bearcat A Place To Chill

If Texas can build a pen for Bevo, Goergia can build an air conditioned dog house for UGA, and Mississippi State can build a freakin dog treadmill surely UC can coble together some trees and rocks that resembles the Binturong's natural habitat. Near the shrubs by the bridge perhaps. 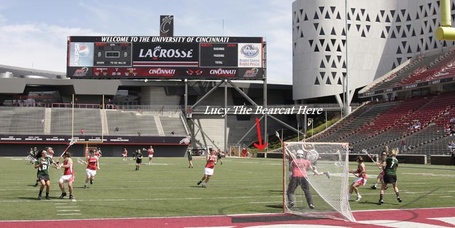 Fix The Ring of Honor System

Its broken because no one knows the rules, it was originally supposed to be for All American's only. But the last person added to the list was Kevin Huber who was an All American in 2007 and 2008. But since then Mike Mickens, Terrill Byrd, Trevor Canfield, Mardy Gilyard, and Derek Wolfe have been named All American's by at least one publication, none of whom have been honored, which makes no sense. These guys should be honored in some way. My solution would be to move the ring of honor to the bridge and adapt a Celtics like approach. It would make more sense than what is happening currently.