The companion piece to the Ge`Lawn Guyn season review published earlier tonight. Troy Caupain was one of the youngest players in the country when the season started, and there were times when Caupain looked his age. On balance he was one of the most positively impactful players for the Bearcats offense.

Share All sharing options for: Troy Caupain Season In Review

I reserved my place on the Troy Caupain bandwagon very early on, and chances are you dear reader have been here often enough to know that. So it can't be that surprising to you that I think that Troy was criminally underused this season.19 minutes a game was nowhere near enough for a team that struggled to score as often as these Bearcats did. Not when Caupain did as many good things for the offense as he did.

That is not to say that there aren't some flaws to his game as a freshman, because there were, or that he didn't hit the wall in early february, because he did. But the positives that Troy brought to the team this season were subtle things that tend to go unrecorded. His passing in particular was a great thing to see, it was creative and most importantly accurate.

Accuracy seems like a simple thing, but it matters, and his passing was one of the many ways to differentiate the play of Caupain and Ge`Lawn Guyn and to mark the differences between them. Its not like Guyn was a turnover machine, in fact Caupain had a slightly higher turnover rate for the year at 22 percent.* So its not like G was kicking the ball into the third row to non existent shooters every other possession. But there was a huge difference in how the ball got to the next guy.

*Guyn was right behind at 21 percent

Guyn was more apt to simply put the ball on the person. That means the receiver sometimes had to devote more attention to catching the ball, or even had to move off their spot to catch it. So rather than being able to catch it and go in one motion, that becomes a two part job. That can rob an offensive of its rhythm and flow and give everything the air of being disjointed. By comparison Caupain's passes were on the money far more often than not. He has a knack for putting the ball right in the receivers shooting pocket. For example take these two sequences from the Rutgers game.

Its only two passes out of the hundreds that he made over the course of the season, but it makes the point. Caupain is a better passer, arguably the best on the squad already and he has a creative flair that is hard to find elsewhere on recent UC teams.

The other thing that I really like about Troy is his ability to rebound. That wasn't a surprise given that he averaged 15 rebounds a game as a high school senior. Still the ability to grab the board and start the break on his own is a huge plus in my book.

For all the positives that doesn't mean that there aren't areas that need work. For a start Troy's shooting chart isn't that much better than Guyn's, but he is at least an average shooter from deep. 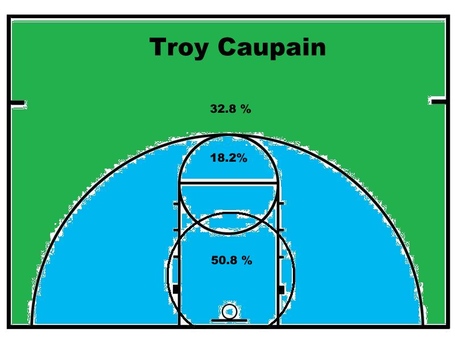 Caupain did a pretty good job playing the passing lanes this season, but he can stand to improve as an on ball defender. With his size and length he should be able to swallow whole some of the smaller guards in the AAC, but he really struggled to stay in front of guys like Nic Moore and Joe Jackson when matched up with them this year.

In this writers opinion Troy was not given enough opportunities to impact games this year. Part of that was beyond Caupain's control, like Mick's decision to split the position right down the middle with Guyn and Caupain. You can also put the decision to generally eschew the transition game where Caupain thrives for half court sets where Guyn's steady hand was something of an asset. I think Caupain had a real good chance to unseat Guyn and start taking the majority of his minutes in early January. Then Troy hit that freshman wall, didn't capitalize on Guyn's really shaky play and wasn't right again until late February.

January. 26th vs. Temple. In a game where the Bearcats wound up being unexpectedly short handed Caupain came up large against the Owls. In 24 minutes Caupain registered 8 points on 3 of 5 shooting, 2 of 2 from deep, grabbed a rebound, picked up a steal and dished out 9 assists against just 2 turnovers. By far his best performance of the season.

If there is one thing that has to be on the Virginia native's to do list this summer it is to get better finishing inside. You could never tell it by looking at him on the TV, but Caupain is a big dude. He is a legit 6'3" 200 pound kid with the wingspan to match, and yet he shot just 51 percent at the rim, a full 10 points off the national average for shots from that range.

Troy is not the fastest guy in the world, so he isn't often going to be getting a ton of looks at the rim on blow by's in the half court. More often than not he will have a guy on his hip any time he goes to the rack, so he has to get better finishing through the inevitable contact. Caupain showed some flashes of that ability this year, but he wasn't very consistent with it. If he can get better at that and more consistent with his jumper it will give him more options in attacking the defense.

If he can add those two aspects to his game the Bearcats offense will be much better. Caupain is not going to be the primary scoring option next year. Mick and Co. are actively looking for a fifth year senior transfer to rent. Preferably one with the ability to come in and be one of the main scoring options. I think that Deshaun Morman will have a big impact offensively in his first year of playing. Kevin Johnson showed signs down the stretch of being the kind of shooter that can give this offense the spacing it has so desperately missed these last two years. If Shaquille Thomas can find consistency he will be another huge part of the offense.

Bottom line there will just be more offensive talent available next year, so it won't come down on Troy to be a Marcus Smart like ball dominant scoring point guard. He will have to run the team, get the ball to the right guys in the right spots where they are effective. That aspect of the game shouldn't be a problem for him. Its easy to look at his size and reach the conclusion that he is a shooting guard who is only playing point as so many guards in the Cronin era have been. But that is not the case, Troy is the first true point guard that Mick has recruited since Deonta Vaughn or Devan Downey. Even Cashmere Wright wasn't a natural point guard, he was a ball dominant shoot first guard in AAU and high school who had learn the distributional aspects of the position once he got here.

Troy Caupain is a natural point guard who happens to be 6'3" 200 pounds with a wingspan that has to be closer to 6'8" or 6'9". UC hasn't had a true point guard in quite some time. I can't wait to see what he does next year.