A bad combination of injuries and general bad luck have limited the development of Jermaine Lawrence over the last two years. The fact that he didn't play his last year of high school with a broken wrist that kept him out of action for the entire season meant that he would have a steeper learning curve than most. Then at the very point where he finally started to look comfortable offensively he went out for a month with turf toe, and he wasn't able to get back in rhythm afterwards. It was something of a polarizing season for Lawrence.

Share All sharing options for: Jermaine Lawrence Season In Review

If Ge`Lawn Guyn isn't the most polarizing player on the 2013-14 Bearcats then Jermaine Lawrence is. The consensus top 25 recruit came to Clifton with a lot of recruiting hype, and a stretch four game that is exactly what the Bearcats need to commit to a four out one in offense. He would come in, serve some time as a featured player off the bench, before moving into the starting lineup where he would remain until he graduated or went to the NBA.

That did not happen, nor does that seem a likely course of events after one season. It is safe to say that Lawrence's first season did not go how anyone expected it to. But there are some out there in Bearcat land tossing out the word bust in relation to Lawrence, it is way too soon for that discussion.

As bad as this season was on the offensive side of the ball Lawrence developed into a nice asset on the defensive side of the floor. That was wholly unexpected from where I am sitting. He was a passable on ball defender, but where he really thrived was as a weak side help defender. Lawrence is the main reason that the Bearcats rim protection didn't vanish anytime Justin Jackson took a seat. Defense is the main reason why Lawrence will continue to get run with this team, even his offense doesn't improve.

For Lawrence to live up to the hype he needs to embrace who he is as an offensive player. At times this year it looked like Jermaine saw the second coming of Kevin Durant anytime he looked in the mirror. He was in love with his off the bounce pull up 17 footer. He shouldn't have been, because that's how he got a shot chart like this. 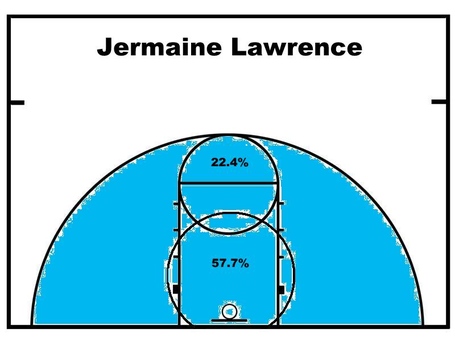 His work around the rim is acceptable, if slightly below average in other words you can live with that. You don't have to be happy with it, but it is a livable number. Outside of that restricted area though, that is a land of a ice and cold, the land beyond the wall. What makes matters worse is that Lawrence had the shot profile of a point guard. In 26 games J-Law shot at the rim 26 times while hoisting 58 two point jumpers. That should have been the other way round.

Jermaine Lawrence clearly fancied himself a perimeter player this season, but its clear he is simply not good one. Justin Jackson and Yancy Gates before him also thought that they were assassins from 18 feet early in their careers. In the end they both went to the block, however grudgingly, and thrived. That is where Lawrence is heading, whether he knows it or not.

January 4th, At Memphis It seems fitting that he best game that Lawrence had as a freshman was the game in which he was lost to injury. The numbers weren't overwhelming, 6 points on 2 of 6 shooting with a rebound in 11 minutes. But that was a huge game, on the road and Lawrence looked up for the game. He wasn't drifting through that game as he had so many others. That was the best that Lawrence looked as a freshman.

Here, I am going to let you say what you think Jermaine needs to work on.

Did you say his low post game? Yes? Twins!

Lawrence is still a supremely talented player who can cause trouble for defenses with his ability to stretch the floor. Much like Ge`Lawn Guyn Lawrence is actually a decent spot up shooter when someone else is creating the shot. Where he gets in trouble is when he takes it on himself to create that shot himself. The defense will always give him that off the bounce 17 footer, and he took that bait early and often as a freshman.

He can hit that shot if someone sets it up for him, but if that is the shot that he is creating and taking for himself that is an easy win for the defense. Jermaine can be a devastating face up player in the post because of his length, athleticism and ability to handle the basketball. But to bring those weapons to bear and make them as effective as they can be he needs a couple of post moves. Lawrence doesn't need the full Kevin McHale post menu. A little right and left handed hook shot, maybe an up and under move as well.

Jermaine Lawrence has all the tools required to be a consistent scoring machine from 12 feet in. The length, athleticism and skills are all there, he just needs to put in the work to put it all together. That catch and shoot 17 footer has to be a compliment to the rest of his game, it can't be the foundation. If I am Mick I would put an ankle brace on him and rig it so that he gets a little shock everytime he wanders further than 15 feet away from the basket. That is where J-Law is going to have to live. That is what this summer will be about for him. There is no place for him to live out there, but there is a nice bed and a comfortable recliner under the basket, so why not live in comfort?