Coming into his senior season Justin Jackson was well and truly defined as a player. He was a guy who would bring energy and defensive prowess in spades, a guy who would do the dirty work on the offensive end; setting good screens, hitting the glass, gobbling up second chance points, but that was it. Except that as a senior those qualities were just the starting point, not the end of the conversation.

Share All sharing options for: Justin Jackson Season In Review

The transformation of Justin Jackson from energy / athleticism / defense guy to offensive center piece really starts with Mick and the coaching staff. Justin spent most of last season on the perimeter as one of the wings in the Bearcats theoretical 4 around 1 offense. The consequences of the approach were dramatic, and not in a good way. As a freshman and sophomore Jackson's effective field goal percentage hovered around 50 percent. As a Junior his eFG% plummeted to 42 and his offensive rating fell with it to a career low 82.5. The coaches knew that for the Bearcats to have anything resembling a successful season they would have to get much, much more from Justin Jackson. In truth they almost certainly got more than they expected from Jackson.

He committed to becoming an effective post player. Jackson developed a series of post moves that individually weren't overpowering, but in combination made him incredibly effective. That is an aspect of his game that wasn't on display before his senior season. Prior to this season every JJ post up was an adventure. Something was going to happen, but it was never clear from possession to possession if what happened was going to be good for the Bearcats or for the opposition. In 2013-14 good things always happened when the Bearcats got the ball to Jackson in the post. Just look at his shooting by area for this year. 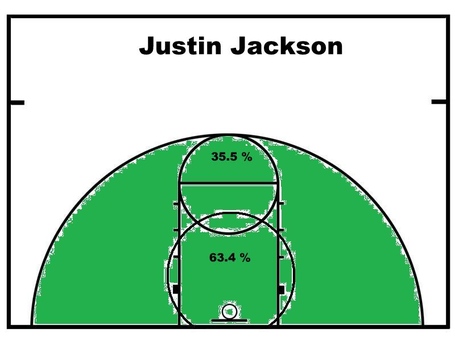 JJ was one of the few players for the Bearcats where every shot was a good shot, at least percentage wise (Jermaine Sanders and Sean Kilpatrick are the other ones). As inconsistent as the Bearcats were offensively this year, and they were just that, they were much better than the 2012-13 team was. As a team the offensive efficiency bumped up from 101.4 a year ago to 107.6 which is by no means elite, but is one of the best offenses of the Mick Cronin era.

Thinking about that improvement in light of the Bearcats starting over at point guard with Cashmere Wright gone, and at the third wing with Jaquon Parker gone its kind of remarkable. Sean Kilpatrick transforming himself from a good player to an All American has a lot to do with that. But Justin Jackson should be lionized for his part in that improvement.

That Justin Jackson became a better player individually, that much is beyond dispute. What really changed this year is that he made his teammates better. A long underrated facet of Jackson's game has been his passing. In his final season the Bearcats really took advantage of that. Jackson became a mini point forward this year.

When you combine that positive impact offensively with him still playing defense with the super human energy that we have become accustomed to and you have a pretty phenomenal season. 2.9 blocks, 1.6 steals both of which wound up being top 20 numbers in the conference for the season. That he was named defensive player of the year in the AAC is hardly a surprise for me. It was merely the logical extension of his play from previous seasons with a higher minute load. The shock was the way that he played offense.

Justin Jackson certainly had games this year where he scored more points, or grabbed more rebounds, but he didn't have a bigger impact on any other game, in part because there were major doubts about whether he would even play this game after sitting out the balance of the Temple game after getting hurt early. But he came to play against the Cardinals. 11 points on 5 of 8 shooting, 9 rebounds (4 offensive), 3 assists, 2 steals and 2 blocks. It was a huge performance in a massive game on national television coming off an injury.