Shaquille Thomas came on late during the 2012-13 season playing his best ball late in the season. His best game that year came in the NCAA tournament loss to Creighton. His performance in that game had many predicting a breakout season for Thomas in 2013-14. That's not exactly how things panned out.

Share All sharing options for: Shaquille Thomas Season In Review

There is no point in ignoring the elephant in the room, but I found the play of Shaquille Thomas to be maddening at times this season. I devoted nearly 1,000 words to prove the point in late February. The issue with Thomas is something of a new phenomenon for the Mick Cronin era, he doesn't seem to know how much he is capable of. The Bearcats have had plenty of the opposite in the Cronin era. Jihad Muhammad thinking he was the second coming of Allen Iverson, young Yancy Gates thinking he was a three point shooter, young Justin Jackson thinking he was the next Kevin Durant. There have been plenty of guys in this era who's perceptions of themselves have vastly exceeded their capabilities. It took Yancy and JJ three years each to realize that the 18 foot turnaround jumper was just not a club they had in their bag.

With Shaq the opposite is true, there is not a club that he does not have in his bag. He is 6'7" 205 with a decent handle, he has effective range out to 18 feet, he can get to the rim at will and he has the balance to finish through contact with either hand when he gets there. On the basketball court there is almost nothing that he can't do at this level. The only problem is that no one has told Shaquille Thomas this, or they haven't told him often enough.

Reading those two paragraphs you might get the impression that the development of Thomas has stagnated after just two years. That is not the case. In almost every measure the effectiveness of Thomas has advanced dramatically from year one to year two, even with the increase in sample size. Just look at his efficiency numbers as a freshman and this year.

A large measure of Shaq's Improvement as an offensive player comes down to his shooting. He was less effective from deep this year shooting 26.3% after shooting 37.5 % a year ago. That doesn't really matter for a guy who has averaged less than half an attempt per game from 3 for his career. The real change came at the rim. 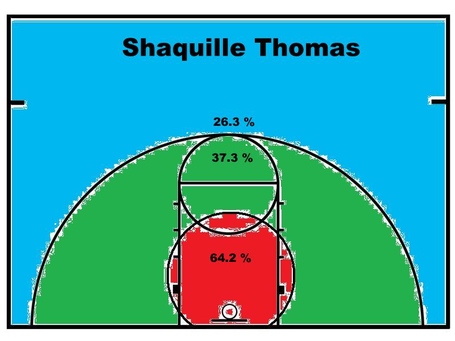 Compare that to his freshman year. Thomas improved his percentages in the mid range despite having double the volume of shots from a year ago. That means its safe to assume that Thomas is a 37% + shooter from midrange, and that he will continue to be just that for the rest of his career. He is the rare person on this team for whom the 15 foot jump shot is an effective weapon.

He also improved his effectiveness around the rim immensely. He now plays at the rim the way a 6'7" guy who can jump out the gym should play there, which is to say very effectively. That means that Thomas as an effective punch and counter punch to his game. If the defender backs off he can hit the mid range jumper at an effective rate. When his defender closes down space to take that shot away Thomas can blow by him and make a play at the rim. That is a very solid punch and counter punch.

The frustration with Thomas was the lack of consistency. He had some great games this year. 15-4-2 against Temple, 11-6-1 at Louisville, 10-4 with four steals and a block at Memphis. The flip side of that is that he no showed in far too many games. He scored 4 or fewer points in a full third of Bearcats games this year, which is not enough.

While there is no singular fix for getting Thomas to be more consistent, a great place to look for one is his free throw rate. It fluctuates almost in perfect correlation to his scoring output. When he is engaged and attacking the rim Thomas got to the line prodigiously. When he started to drift his free throw attempts would dry up. There was four week stretch from early December to early January when he averaged 3.6 free throw attempts over 9 games. Then there was the 8 game stretch from February 19th through the end of the season when Thomas had a total of 10 free throw attempts. In six of those games Thomas failed to get to the line even once. That is simply not enough consistency, and that lack of consistency also popped up on the defensive end as well.

Stop me if you have heard this before, but Thomas has all the tools to be a dominant defensive force. He is long, uber athletic and aggressive, capable of swallowing smaller guards and wings whole. But Thomas was not always an effective defender. He has the tools, but his attention to detail just wasn't always there. He struggled mightily to defend Neils Giffey because of his tendency to overhelp on drivers rather than sticking to the 47 percent three point shooter he was tasked with defending. So much of basketball defense is knowing where to be and when to be there, and Thomas's positioning could be a disaster. Frequently Thomas did good work for 30 seconds of a possession only to get caught overhelping on a drive which would lead to a good look late in the shot clock. So much of defense is knowing where to be, and perhaps more importantly when to be there, Shaq Thomas had issues with both.

The game that more or less answered whether or not Shaq Thomas was capable of performing in a big game as one of the main cogs offensively. Thomas was everywhere in this game scoring 11 points on 4 of 5 shooting, grabbing 6 rebounds and picking up an assist. It was his most complete game of the season.

The difference between good players (which Thomas was this year) and great players (which is what UC will need him to be to win the AAC again) is that great players have the ability to manufacture points even when their shot is not falling. For large portions of the early season Sean Kilpatrick was mired in a shooting slump, but he still manufactured points by putting his head down and getting to the line. The Bearcats crunch time offense was basically get it to SK so he can get fouled while attacking. Next years team will obviously need someone to shoulder some more of the scoring load. I think Kevin Johnson is a good candidate to see his share of the offense skyrocket, but Thomas is perhaps the more obvious candidate.

Shaq has the ability, he has nearly 70 games and well over 1,000 minutes of playing time so he has the experience box checked as well. The question is can he become a consistent day to day player? Mick Cronin has always been fond of saying that SK got out of bed scoring 15 points. That wasn't because he is a pure shooter in the Ray Allen mode, his jumper comes and goes. But on the nights when its gone SK would put his head down and get to the line 7 or 8 times and make 6 or 7 of those.

Thomas has all the skill and ability in the world to become a consistent night in, night out 12 to 15 point a night scorer, and he will have to be for the Bearcats to make it five straight trips to the NCAA tournament. The number one thing he needs to work on is manufacturing points, but it is very hard to manufacture points shooting mid range jumpers. Thomas shot 110 mid range jumpers this season, thats 40 more than he shot at the rim. That isn't as bad a shot for Shaq as it is for most guys, but it is still a shot the defense will gladly give him time and again.

That shot profile has to change next year, Thomas has to get to the rim more frequently. He will need to get fouled more frequently, and he will have to start making free throws at a higher clip to be as effective as he can be. I am sure the temptation will be there for him to work on his game behind the arc, but that's not a shot he has to have to be effective. He can be effective playing where he is playing now, at the same kind of percentages if he is simply more aggressive in getting to the rim. If Thomas can become a 45 percent shooter in the midrange while still shooting above 60 percent at the rim while getting to the line 4 or 5 times a night...whew. If he can become that guy he will be a matchup nightmare for everyone.