Danny McCoin; Oh For The Wonders of Defense

Share All sharing options for: Danny McCoin; Oh For The Wonders of Defense

The Dave Currey era at Cincinnati started with a resounding thud. Currey inherited a team that was solid on offense, or at least that had two established stars in running back Reggie Taylor, fresh off a record breaking Freshman season, and an established starter in Troy Bodine at QB. But the defense was terrible. I mean TER-RI-BLE. The 5,298 yards given up was, at the time, the worst mark in school history and the team floundered to a 2-9 record. But there was still some hope for young Mr. Currey, he had his new QB all lined up and ready to go. His name was Danny McCoin. 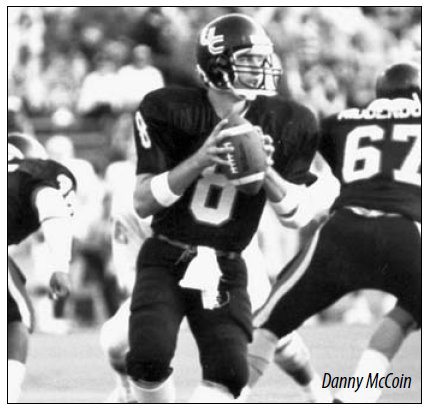 In McCoin's first year as a starter Currey leaned heavily on Taylor, he carried 264 times that season. As the season went on though McCoin gained a larger and larger share of the offense. At the end of the year it was no longer just the Reggie Taylor show, McCoin had turned it into a double act. But even with the offensive fireworks the team struggled because the defense was just abysmal.

This would develop into a theme for McCoin, and for Currey's teams in general. When they were on they could heap yards and points on teams in bunches on offense, but they couldn't stop a soul on defense. Ever. From 1984 through 87 Currey fielded defenses that currently rank as the 2nd, 5th, 7th, and 8th worse defenses in school history. No amount of offensive pyrotechnics could salvage that kind of ineptitude. McCoin and company did what they could on offense. But the defense was too terrible to overcome and one year after the greatest running back in school history walked off the field of battle without experiencing a single winning season the best, most prolific QB since Greg Cook walked off the Lane Stadium turf without a winning season either.