Share All sharing options for: Gino Guidugli; The Enegmatic One

The legacy of Gino Guidugli is a tricky thing to deal with for most of Bearcat Nation. We all respect him for his on field accomplishments. The only four year starter at QB in program history, the only Bearcat QB to throw for more than 10,000 yards (11,453 to be exact) the all time leader in passes attempted and completed, passing yards, total yards, total TD's and on and on. You could very well argue that he did more for his teams offensively than any Bearcat in the history of the program. 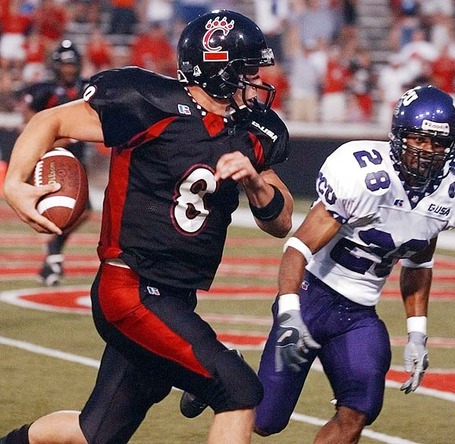 But, when you ask a UC fan what they think of Gino positive responses are exactly bubbling forth. The same things will be brought up again and again. Some will be performance related "He cost us the Ohio State game" or "He regressed after his stellar Freshman year." And then some will be extra curricular in nature like "He's kind of a dick." All of those things are true to an extent. His father saying that he regretted his son ever coming to Clifton sure didn't help the perception of his oldest son. I for one would never argue that Guidugli was an upstanding citizen of the campus. But I also don't really care either.

Guidugli's place in Bearcat lore is secure because of the positive things he brought to the program. For four years the team lived and died on the right arm of Gino Guidugli. And for all of the melo drama and controversy off the field the team on the field mostly lived. He was the comeback kid. He was a part of the first class of Bearcats to go to three bowl games in four seasons. Every class since his has done the same thing. That's his legacy to me, and that is worth some recognition, even if you don't like him as a person.