Greg Cook; A Player Ahead of His Time

Share All sharing options for: Greg Cook; A Player Ahead of His Time

Simply put Greg Cook is the best QB in the history of the Cincinnati Bearcats Football Program. Geno Gudguli might have all the records, but Cook was better. He was recruited to UC by Chuck Studley out of Chillicothe Ohio where he was an All Around athlete starting in Baseball, Basketball and Football for the Cavaliers.

After the 1966 season Studley was fired and the Administration brought in Homer Rice to take the reigns of the program. Rice was a big proponent of the Veer offense, he learned a great deal about the running game at the hands of Bill Yeoman, the Veer Ubermensch. The real brilliance of Homer Rice though was to marry the veer running concepts to a sophisticated passing attack. He must have been delighted when he stepped foot on campus. He might not have known it at the time, but his perfect QB was already waiting for him on campus, and his name was Greg Cook. 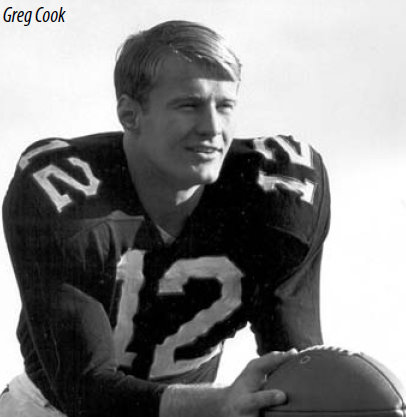 Cook had a good year in 1967, but he set the world alight in 68. That season he threw for 3,372 yards and 25 TD's. He had 9 250 yard games, and 8 of those came consecutively. His 554 yard out burst against Ohio is still the single game record at UC. He also had a 98 yard score in the Louisville game which is also a school record. That year was also the first time that UC ever had two 1,000 yard receivers in the same season as both Jim O'Brien and Tom Rossley both went over 1,000 yards on the year. It would be 50 years before Mardy Gilyard and Dominick Goodman would match the feet in 2008.

But for all the offensive pyrotechnics the team wasn't all that good. Going into the season concluding contest with the Miami Redskins UC had a 4-4-1 record. Miami was coached then by Bo Schembechler and came into the game with a 7-2 mark, angling for a bowl game. The UC players were desperate to come out with a winning season for the first time 4 years. Miami took a 14-0 lead into the fourth quarter, but then Cook got hot. In the fourth quarter alone he went 18 of 22 for 263 yards and three TD's. A failed two point conversion put UC in a tough spot. with 69 seconds to play facing a 4th and long Cook connected with O'Brien for a 23 yard gain. A couple of plays later Cook found Rossley who stepped out of bounds at the 30 with 3 seconds left to play. O'Brien kicked the 47 yard field and UC sprang the upset. Cook's final stat line went 52 attempts, 31 completions, 407 yards with 3 TD's and no interceptions.

Paul Brown was in attendance at the Miami game and knew who he would be taking in the Draft that season. The Bengals selected Cook with the 5th overall pick in the 1969 draft and in the process because UC's first ever 1st round pick. Cook won Rookie of the Year in 1969, but he picked up an injury that wound up costing him his career having played just the one season.