When Rick Minter took over the reigns of the Cincinnati program he decided that he was going to build the program in the mold of his mentor and idol, Lou Holtz. That meant physical, balls to the wall Football on offense and defense. They were going to run the ball and stop the run above all else. But there was a third component of the game, the special teams. I am sure that Minter aspired to dominate the special teams here at UC like Holtz did at Notre Dame. The problem was in the kicking game.

When he got to UC he found Eric Richards waiting for him as the ambassador for the kicking game. Richards was OK, not great. Richards led the team in scoring in each of his three years as a starter but was rarely more than solid. After Richards graduated the kicking game fell off a cliff and Minter started looking for a kicker. He found his man at a small Louisiana High School called Ridgewood Prep.

Jonathan Ruffin came to UC and won the starting job straight away, but it did go exactly to plan that first year.

"Everything hit me all at once," Ruffin said. "After that, nobody believed I could make a kick, and I didn't either."

He began '99 4-of-5 on field goals, then made only one of his last seven. UC coach Rick Minter even signed a junior-college place-kicker, Victor DiMauro, before this season but wound up red-shirting him when Minter saw how Ruffin had straightened himself out.

Ruffin rebounded from that troublesome 1999 season to have a banner year in 2000. That season he went 26 of 29 on field goals and 26 of 27 on PAT's. That performance earned Ruffin consensus All-American plaudits, the first Bearcat since Mike Woods 23 years earlier to be thus honored. He was also the winner of the Lou Groza Award, the first, and to date, only Bearcat to win a national individual award.

In his last two years Ruffin kept up the same level of precision that had won him the award in the first place. Ruffin ended his Bearcat career having attempted and made more, field goals, and PAT's than anyone else and sitting high above the competition for points scored in a career. 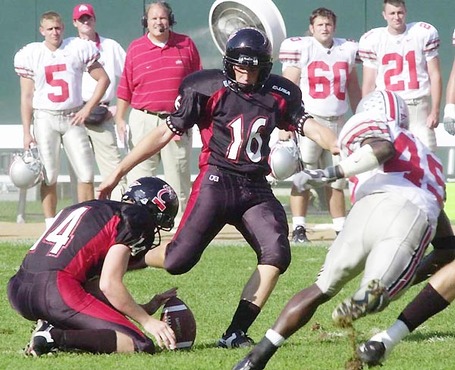