Kevin Huber; Sometimes a Punter is a Weapon

Share All sharing options for: Kevin Huber; Sometimes a Punter is a Weapon

It is the ultimate in oxymorons. In the game of Football players can be weapons. A strong armed Quarterback, a sure handed Wide Receiver, a game breaking Running Back or a shutdown Corner Back those guys can all be weapons. But a punter? How can he be a weapon, and tangentially related how can a punter be a weapon for all offense all the time Brian Kelly? I don't know about the how, all I know is that Kevin Huber was a game changing punter. 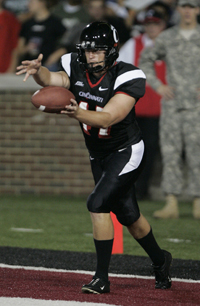 Huber attended Archbishop McNichols High School where he was a three year starter. He came to UC redshirted his first year and promptly sat behind Chet Ervin and Brian Steele. When Kelly came to UC he promoted Huber to starter. He rewarded Kelly by bombing two punts and averaging 50 yards per kick. It was a taste of things to come as Huber started his final two years as a Bearcat and set records for the highest career average, and the two highest single season averages, both of which were top 10 nationally. He was a back to back first team All American in his two seasons as a starter and was the Big East Special Teams Player of the Year in 2007. We all are in the habit of remembering the Kelly era for it's offense. While there is nothing wrong with that in and of itself, but there is something wrong when the focus on the offense distracts us from just how good Kelly's teams were on Special Teams and Kevin Huber played a huge role in that.