Share All sharing options for: Reggie Taylor; The Ultimate Outlier

When you think of the word "outlier" you will almost certainly see a picture of this man flash before you're eyes, or if you are mathematically inclined you might see this. What you really should see is this man. Reggie Taylor was a man apart. In an era dominated by big, physical, pounding running backs like Eric Dickerson and Go Jackson Taylor stood just 5'7" and weighed around 175 pounds. While the era of the Wishbone was coming to an end. The offenses of the era weren't exactly designed for a player like Taylor.

Taylor was a Los Angeles native. He attended Lynwood High School where he ran rampant on the competition. In his Senior season he ran for 1,287 yards and 15 TD's. All that despite missing out on three games with a deep thigh bruise. His size kept the recruiters away for the most part.

Taylor attributes that to his size. In a sport dominated by Nautilus-enhanced behemoths, the 5-foot-7, 170-pound Taylor just doesn't stand out.

"I never got a whole lot of publicity because of my size," Taylor said. "And I guess being this size denied me some opportunities."

In the end he had two scholarship offers. One was to go out to Hawai'i to play for Dick Tomey's Rainbow Warriors, the other was to come to the Mid West and play for Watson Brown and/or Mike Gotfried (who's first coaching job was at my high school Alma Mater. No shit) at the University of Cincinnati. Taylor chose the later and thus became the only teenager in history to pass up four years on Waikiki Beach for four years in Cincinnati.

But the Bearcat fans couldn't have been happier. Taylor started as a Freshman for Brown and led the team in rushing with 784 yards on 158 carries, which was good for 4.7 yards per carry, with 2 TD's. Brown had found his star, but he didn't stick around long enough to see what a star he would be. Brown left the quiet, sedate confines of Cincinnati for the pressure cooker that was the Southwestern Conference, in all of it's rampantly corrupt glory.

Taylor was fortunate enough to have a solid running mate in the form of Troy Bodine who was a two year starter in 1983-84. His Sophmore year was the first of three consecutive 1,000 seasons and earned him Honorable Mention All-American status. The last two seasons brought more personal success for Taylor, two more All American seasons, two more years with more losses than wins under the comically inept Dave Currey at the reigns.

When I started the process of actually digging into the histories of the players enshrined on the Ring of Honor I knew that there would be some players who had pretty rotten draws. Guys who excelled for the program, carried it through when it was at it's lowest ebb, who are largely forgotten. Who only the most hard core of Bearcat fans know about. While that is in and of itself regrettable, I don't really feel bad for all of those guys. But I really feel bad for Reggie Taylor.

Here is a guy who led the team in Rushing, and All Purpose Rushing all four years and in his Junior and Senior years finished second in receiving yards. Taylor carried a herculean load and was often the smallest guy on the field. His 888 carries is 99 more than the runner up in the category, DeMarco McCleskey. And he did all of this against an absolutely brutal schedule. Alabama, Auburn, Penn State, West Virginia, Virginia Tech and Miami every single year. But hardly anyone knows him and even fewer remember him. That's a shame because he is the best running back in school History. 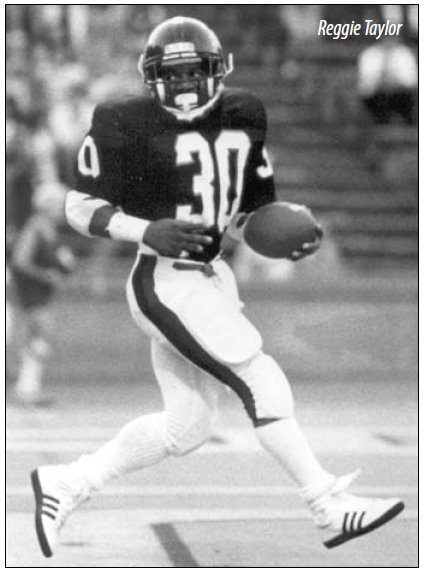