The late 40's were heady times for the Cincinnati Bearcats Football team. Like most College Football programs of that time the Bearcats shut up shop at the conclusion of the 1942 season. After Pearl Harbor was bombed just three weeks after the conclusion of the season there was the small matter of winning a World War to take care of. So Nippert stadium lay vacant for the 1943 and 44 seasons. When the program was reconvened Ray Nolting was the man in charge and he set about luring the best athletes in the Queen City to suit up for the Football program. The Bearcats of that era were absolutely stocked full of 25 year old, battle hardened (literally) men masquerading as Freshman Football players. O'Malley was just such a player. Having spent three years in the Navy he returned to Cincinnati at the end of the war to marry his girlfriend, use the G.I. Bill to get his degree, and play Football. Not necessarily in that order. 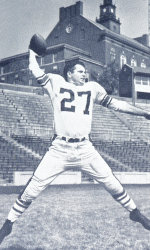 O'Malley joined the Bearcats for the 1946 season. But, since Freshman couldn't play in those days he was left home and took no part in the Bearcats 1st ever bowl game. In that season the Bearcats under Nolting went 9-2, with slip ups against Kentucky at Nippert and at Tulsa. Regardless the Bearcats earned a trip to El Paso for a match up with the Hokies of Virginia Polytechnic Institute. The Bearcats won that first bowl appearance 18-6.

In '47 O'Malley was a member of a team that played in a conference, the Mid American Conference for the first time since 1937 and the Bearcats won it straight away, but the record fell to 7-3 included a disastrous 38-7 beat down at the hands of the Miami Redskins in Nippert. The next year was even worse the record dropping to 3-7 including another loss to the hated Redskins. Nolting was sacked shortly thereafter.

'49 meant a new start with a new coach, one Sid Gillman. Gilman must have liked what he saw in O'Malley because early in the year he hitched his wagon to his Senior QB and rode him to a second MAC championship in 3 years. UC went 7-4 that year and went to a bowl game, the Glass Bowl, which happened to be played in the Glass Bowl, against Toledo. But the highlight of the year had to be getting the Miami monkey off his back. UC crushed the Red and White 27-6 in front of a sold out Nippert crowd in the game that can be labled as the tipping point in the Miami rivalry. That year O'Malley led the nation in passing with 1,617 yards and 16 TD's. His yards per completion and TD marks still stand near the top of the record books.