We are now roughly two thirds of the way through the long desert that is the College Football off season. Being that is the dead period in the sport the journalists who cover it full time, not to mention the army of blogger's, have to write about something. Easily the most popular meme of the past four months has been the Big 10's statement to explore expansion. From there the PAC 10 announced that they too were considering expansion. That became the basis for declaring the long awaited era of the superconference to be at hand. From those two announcements an orgy of speculative rumors have run roughshod over the blogosphere and supposedly more professional journalists about how those superconferences would be created. There was Texas to the SEC, Texas to the Big 10, Texas as an independent, Texas, Oklahoma, Texas A&M and Oklahoma State to the SEC, Nebraska to the Big 10, Georgia Tech to the Big 10, Maryland to the Big 10, Utah and Colorado to the PAC 10, Florida State, Clemson, Miami and Georgia Tech to the SEC, the death of the Big 12, and Chelsea Football Club to the ACC. Most of those scenarios would best be described as masturbatory fantasy's, some of them have a great deal of traction though, and some are laughable by design (guess which one).

One of the more constant meme's over the past four months has been the potential death of the Big East. It's not hard to see why, almost every single Big East Football school has been linked with another conference. Rutgers, Pitt, Syracuse, and Connecticut to the Big 10. South Florida, West Virginia, and Louisville to somewhere else. All rumors with varying levels of sincerity. UC is even being tossed around in rumors to various conferences. But it seems increasingly likely that the Big East will receive a stay of execution in the coming conference expansion apocalypse. The Big 10 is seems unlikely to take more than one school from the Big East, and it will probably be the wrong one. The Big East would then plug in an ECU, or UCF and continue on. Personally I don't particularly care when the domino's start to fall, where each particular domino lands, all that is secondary. Just wake me up when it is over. More interesting is why the Big East is the prime target during each of the last rounds of the conference expansion wars, but the most interesting thing by far has been the reaction of the Big East conference leadership to the boondoggle that has been the ceaseless rumor mill surrounding conference expansion, only a fraction of which I have pointed out.

The Big East leadership has done absolutely nothing so far, which is just stunning to me. Active members of the Big East have openly and unabashedly declared their interest joining the Big 10 over the last 6 months or so and the reaction from the league office in Providence has been to scratch their collective nuts over the matter. Look, I am not an idiot. I know that there is little to no chance that the Big East and persuade anyone with an offer on the table from the Big 10. The Big 10 Network allows that conference to cut each member a 20 million dollar check every year, that's about double what the Big East's last contract pays each member for Basketball and Football combined. That 20 million doesn't count the revenue from their deal with ESPN. So turning down the Big 10 to stay in the Big East would mean saying thanks, but no thanks to tens of millions of dollars. That just isn't going to happen. I am a realist and I can swallow that without too much trouble. But the absolute least I expect from Providence is a good faith effort to prevent the Big East Football ship from sinking. To date the only step they have taken is to hire Paul Tagliabue to consult on the issues currently facing the Big East. Which was greeted with a universal response of "what?" by almost everyone. Being the former NFL commissioner he clearly knows the business of television. But, as an NFL lifer, I seriously doubt that he has anything resembling a complete understanding of the current environment in which big time college sports work.

The way I tend to think about events, particularly large paradigm shifting events, is to try and find a historical analog for the present event. Now the dissolution of the Big East as a Football conference wouldn't be a big event to many, but as a UC fan it would be huge to me. My analogs are rarely a perfect fit but this one is the best.

Since Cincinnati joined the Big East I have always read and heard rumors of the strangle hold that the basketball schools in this conference have over the power structure of the conference. That the Big East offices are basically an outpost of the Providence College athletic department. I heard and read those things and thought yeah, maybe that stuff is true, but more than likely not. The overwhelming response to those comments from me has always been bullshit. Since the Big East first formed as a Football conference there has always been a lot of tension between the Football schools and the Basketball schools. The conference in its original iteration was formed as a Basketball conference and operated, and thrived as such through the 80's. When Football was brought in the 90's the Basketball schools viewed them as usurpers to the throne yada, yada yada. The end result was a successful conference, albeit with strained relationships between the two camps. It wasn't ideal, it was far from perfect but it worked, more or less, for a decade. Then the ACC decided that they were going to try, and ultimately fail, to be a power conference, a coastal SEC, by welcoming Miami, Virginia Tech and Boston College to their party. That era brought to light the divisions between the Football schools and the Basketball schools, which were a closed door matter for most of the 90's. The division between Basketball and Football schools behind closed doors does seem to be more real and tangible now than it was before. I think that division can be typified by the tepid response from Providence over these last few chaotic months with prognostications for the doom of Big East Football.

If you are going to look through the history books to try and find a similar situation to what the Big East is as a Football Conference it is Czechoslovakia. Czechoslovakia was one of five successor states to the Austro-Hungarian Empire that were birthed in the aftermath World War I. The country was diverse but had two main ethnic and national groups, the Czechs and the Slovaks. The two different national groups co-existed for the history of the nation. That is not to say that there weren't occasional clashes of ideas and nationalism between the Czechs and the Slovaks, but in general they got along well enough until the Velvet Revolution when Czechoslovakia became two independent nations, Slovakia and the Czech Republic.

For the Big East the line of division was not along national lines but between those schools that played Football at the highest level and those that did not. Further complicating the matter is the fact that the majority of Basketball schools were all rather small, private and catholic. On the other side of the isle the Football schools were for the most part, large, either state funded or state supported schools. The only Football members that were private institutions were Miami, Syracuse and Boston College, only the latter of which has a religious affiliation. So in addition to being contentious about the sports their schools played, they could also could be contentious about religion. Its always a wonderful thing for people to be contentious about religion, it works great for India and Pakistan.

Czechoslovakia was thrown together in a period of almost incomprehensible political upheaval. The Austro-Hungarian Empire was crumbling, Italy was advancing to deliver the deathblow to the empire. Rather than go down with the sinking Hapsburg ship nationalists from both ethnic groups struck out together to declare independence from the empire and form their own state rather than having the composition and dimensions of the state determined for them by the Treaty of Versailles, that is if the Big Four acknowledged their existence.

At the time of the formation of the Big East college football was experiencing something similar. Though much less serious, smaller in scale and in reverse. So maybe not that similar. Anyway, the early 90's spelled the end of the era of independence in College Football. Schools across the country were leaving behind their independent status for the safety and security of conference affiliation. For most schools it was becoming increasingly untenable to remain independent. That was a large paradigm shift in the sport completely changing the way that schedules were made, rivalries were contested and how TV rights were determined. Prior to joining the Big East every single charter member was independent. So the Big East was formed for the joint protection of it's member institutions in a rapidly changing environment much like Czechoslovakia was created for the safety and security of the people within their borders.

I could continue on with the analogy. I could equate Czechoslovakia ceding Carpathian Ruthenia to the Soviet Union in June 1945 with the ACC raiding the Big East in 2003 and carrying Miami, Virginia Tech and Boston College back to their sumptuous Greensboro mansion as their very own personal possession...but I think the point has been made. There are natural fault-lines within the membership of the Big East that are as clearly visible as the mid Atlantic ridge in Iceland. The only real question is when will the Big East have its Velvet Revolution? 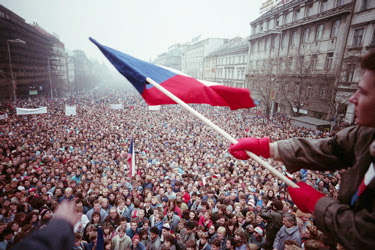 And will the coming conference realignment be the catalyst for it?