UC Volleyball Is Kind Of A Big Deal

Share All sharing options for: UC Volleyball Is Kind Of A Big Deal

try my best to keep an eye on all UC sports. But this being college Football season, my focus this time of year is really just on that sport. That probably makes me a shitty blogger but it is what it is. In my defense when I was at UC I went to most sporting events because they were fun, cheap ways to spend a day all that made it easier to keep track of things. Now, given where I live, attending most events is out the window, but I try to keep up with things online. One team who's performance has been on my periphery this fall has been the Women's Volleyball team. Reed Sunahara's girls are 15-3, 4-0 in the Big East and currently ranked 21st in the country. The unquestioned star of the team is Stephanie Niemer who is sitting on a streak of 4 straight weeks being named Big East player of the week. 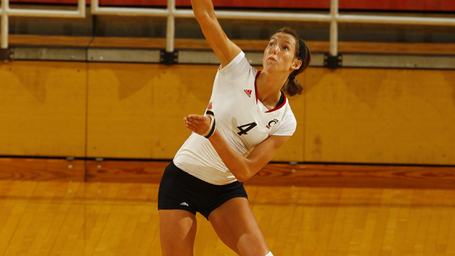 Personally I like Volleyball, always have. My sister played in high school when I was a little kid. It was one of the two sports that my high school was always good at, the other was Football so we went to the matches and stuff. As a school we basically mailed in the other 6 months of sports, but I digress. I like volleyball, but I don't know a ton about it. For that reason I will defer to Scott over at Bearcats Blog who put up a great post on the team a few weeks ago and seems to posses the knowledge that I so conspicuously lack on the topic.

The reason why I bring this up is that the volleyball team will be playing Notre Dame on Sunday at five, a match that will be televised nationally on ESPNU. So after watching your NFL team of choice play like shit, in most readers cases I assume that's the Bengals, in mine its the Browns. Flip on over to 1303, for those of you with time warner cable HD,and show your support for what is the most successful team on campus. At the very least DVR it because watching attractive women play sports is never not fun.