Share All sharing options for: Lets Talk About Staffing Changes

There was an interesting piece over at sporting news that took a look at what went wrong with the UC Football team this year. Most of the points that they make within are valid ones. But there are some interesting comments to be sure. The one that jumped out at me right away was this

I understand the impetus behind the lack of changes to the staff. These players have had a different Defensive Coordinator each of the last three years, and a fourth one would be a bit excessive. I am not concerned with the Coordinators, I would like that to be John Jancek's job rather than Tim Banks but if they have to keep the Co- Coordinators thing another year so be it. But there are members of the current staff who have done jobs bad enough not to merit keeping the whole crew together just for the sake of continuity. The first person that comes to mind for me is Kerry Coombs. Coombs is a great person and an invaluable resource to the staff with his wealth of contacts among high school coaches in the state. But, he is a disaster as a secondary coach and needs to be stripped of that position. I would be more than happy if from now on Coombs was just the Special Teams Coordinator and Associate Head Coach. I know the defense that comes from most people on this is that the talent and experience just wasn't there in the secondary, that is a valid point, but it misses the larger one. 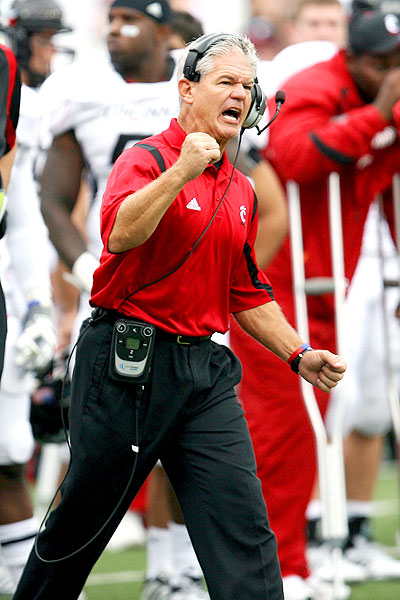 A coaches ability to coach the game should never be dependent on the talent at hand. Finding the right players is a big part of the job, but being able to coach them to succeed at the highest level possible is the biggest part. The hallmark of a great coach is getting his players to improve each week every week. That is doubly so for a unit that is awash in underclassmen like UC's secondary. Did you see any discernible improvement in the play of the secondary from the first week to the last week? Because I sure as hell didn't, and that doesn't bode well for Coombs in my book. As bad as this secondary was in the first week there was only one way to go, up. But UC stayed the same and tread water for most the year. UC was ranked in the triple digits in Pass Efficiency defense after the NC State game, and they stayed in the triple digits for the rest of the year, finishing out ranked 106th. The talent was not great, particularly at safety. No one is denying that.

But this was a secondary that repeatedly made the same busts in coverage game after game, series after series. Good position coaches should be able to correct mistakes in the play of their units if not on a series to series basis, then at the very least from game to game. That holds regardless of the level of talent and experience possessed by the players. The only difference is that the more talent and experience a group has the more nuanced the corrections become. But UC was very young and very basic and the mistakes they would make in coverage were elemental in nature. How hard is it to drill into the corners heads that in a cover three there is absolutely no safety help over the top? But every corner, every single fucking one of them, bit on a double move in cover three and gave up a TD. Dominique Battle did it against NC State, Cam Cheatham did it against West Virginia, Deven Drane and Reuben Johnson both did it against Rutgers. Knowing responsibilities in a coverage, who has what zones, is the most basic responsibility. If a coach can't get his group past that point there is nothing to be done. It's like math if you can't pass Algebra you can't take Calculus. Same principal here except that understanding the zone responsibilities isn't even Algebra, its Addition and Subtraction and Coombs hasn't even imparted that basic level of understanding on this secondary. That's the issue in terms of his ability to coach the position for me.

If you want a specific example of Coombs coaching out of date techniques I have a very simple one. One of the central tenets of the Coombs secondary is that he wants to disrupt the pass patterns being employed by opposing offenses. He plays zone coverages and when a linebacker or a corner back passes off a player from his zone to the adjoining zone Coombs teaches them hit the receiver before they cross into the next zone, or to reroute the receiver. If you have attended a UC practice since Coombs joined the staff and watched 7 on 7 you should remember hearing Coombs scream "re-route" a thousand times a day.

The problem is that this technique of his assumes that offensive passing games are static and that by re-routing the receiver and making him take a different path the defense has destroyed the integrity of the pattern. At Colerain that may have been the case. Very few high schools have sophisticated passing attacks like those seen at this level. In high school receivers run the pattern just like it is shown on the page of the playbook and knocking the receiver off course can cause the QB to miss the pass because most high school QB's will never come off their primary read. Disrupting that read can cause real problems for an offenses passing game.

In College that is not remotely the case. For a start the QB's are much better at reading their progressions and have a much easier time working through all of their primary reads before hitting the check down. So knocking the primary read off course isn't as important because of the multitude of reads on offer for a QB. If the primary isn't there then it is on to the next one. Throwing further wrenches into the plan are the option routes ran by receivers at this level, something that isn't accounted for at all with this technique which assumes that routes are static and unchanging rather than dynamic and infinitely variable, which they are. To combat the spread and the ever increasing depth and complexity of the spread at the college level defenses have had to adapt. What Coombs is teaching was the prevailing thought in coaching circles in the early to mid 90's. But as the spread began to grow and evolve and take root the prevailing defenses of the day proved to be lacking. To combat the spread defensive coordinators began to develop new techniques and schemes, and the one that emerged as the prevailing notion was Pattern Reading.

In the simplest terms possible pattern reading is the systematic study of offenses and the passing concepts they use. Typically a coach charts all of the formations an opposing offense can be expected to use in a game. Next they break down the passing plays run out of each and rank which concepts are most likely to be run based on formation. You can go even further and chart based on ball spot, down and distance, which quarter and so on and so forth. The basic premise is that if a team can assume with reasonable certainty which concepts are most likely to be used in a given situation they have an advantage on the defensive side of the ball. If a team uses the stick concept on 60 per cent of all snaps in an empty set the defense will know that heading into the game. So when opponent lines up in an empty set the defense doesn't have to try and think which of the thousands of different route combination's that could be run, they have a set checklist that they work their way through. Much like a QB has progressions so does the defense. They look for stick, if that's not it they look for mesh, if that's not it levels and so on and so forth. And the defenders can tell which concept out of the dozens of possibilities is being run within 3 or 4 steps because each concept has tell tale signs based on how the receiver stems the route. Doing some pattern reading on coverage is pretty much the only way a defense can succeed in the game today, and Coombs isn't doing any of it. For Coombs to keep his job he has to change the way he does things, but I don't think that is likely to happen next year