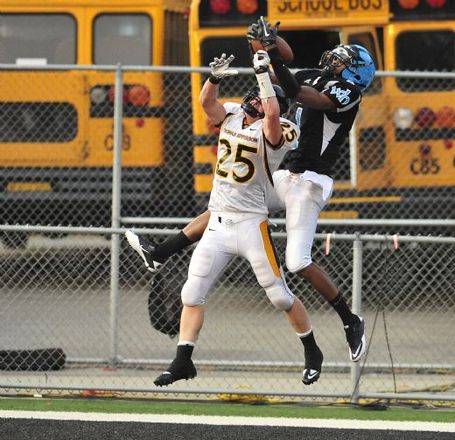 The Cincinnati Bearcats picked up another commitment today from Pittsburgh Woodland Hills Wide Receiver Shakim Alonzo. The quote from their coach is somewhat enlightening.

"He's a strong player, very competitive and an outstanding blocker," Woodland Hills coach George Novak said. "Cincinnati likes his size, his long arms. They don't have a tall receiver, and they like to throw the ball. Unfortunately, we don't throw the ball as much as some schools but he's been our main receiver the past two years."

What I hear when reading that is that the UC coaches see a big time athlete with potential, but they don't have a set idea of where they want him to play. At least not like they do with Dennis Norfleet or Bennie Coney. Like Ti'on Green his athletic ability is manifest, but there is no real concrete idea of where he will wind up. He could stick at receiver, but he has the frame to move inside and play Tight End because he weighs 200 pounds, and as you can tell from the picture, he looks kinda skinny. Alonzo had offers from Purdue, Pitt, West Virginia and Wisconsin.