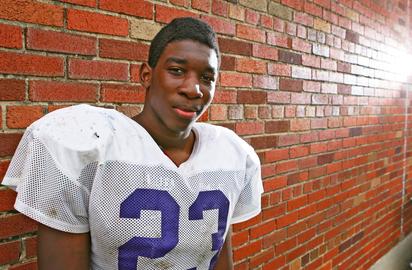 E.J. Junior has committed to play for the Bearcats. The offer is somewhat conditional. Junior is expected to greyshirt for the 2012 season and join the program, on full scholarship, in January of 2013. Junior is the first Middie to commit to the Bearcats since Scott Johnson back in 2007 .

Junior was a big part of the Middies success this past season playing essentially as the B Back in Troy Everheart's tripple option flexbone offense. Junior ran for 859 yards and 11 TD's in 10 games with the Middies. He also played defense last year. The Middies had the best defense statistically in the Greater Miami Conference, though Colerain allowed fewer points.

I have no real idea where Junior will wind up in terms of a position. At 210 pounds he is a little bit bigger than ideal for a running back in this offense. But he could find a role as a fullback, similar to what George Winn has done this year, and what John Goebel did in 2010. For what its worth his dad played Linebacker in the NFL for 13 seasons.