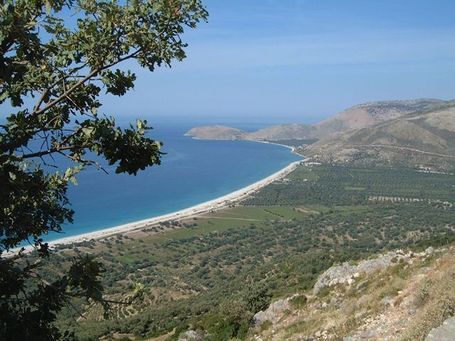 Albania is a lovely country. It really is. The combination of a mostly Mediterranean climate, the somewhat mountainous nature of the topography and the fact that no place in the country is ever more than 200 miles for the Adriatic Sea means that it is a breathtakingly beautiful land. The problem with breathtakingly beautiful lands is that over the course of World History the most beautiful lands amongst us are almost always the most fought over lands, right India? India? Any-who so it is in history and so it is for Albania. Albania is a country that has endured centuries of ethnic and cultural tensions. It was the knott in the proverbial game of tug of war between the Muslim Ottomans and the Christian Austro-Hungarian Empire. It has been ravaged time and time again by conflicts and wars and has seen off the rule of fascists and communists, monarchies and nascent democracies. All the while the people have remained proud, resilient and strong. It is a strange country, and yet a very beautiful one at the same time. Now I am sure that you are wondering why exactly you have spent the last two minutes reading about a country that for most people is little more than a name.

One of the biggest problems I see with the short mindedness of our collective societal mindset is that it becomes very difficult for us to distinguish the true paradigm shifting events from events whose significance is derived almost solely from hyperbole induced manic state of mind that grips our collective cultures. There is nothing with a little bit of hyperbole, I tend to enjoy some just about every day. But too much of it means that we as a nation, or as a fan base struggle so profoundly to see the forrest through the trees.

Albania really is a beautiful place on the face of the earth, but most people who live there don't recognize it as such. The last century has seen the fruition of their nationalist dreams throwing off the Ottomans, establishing their own principality, The Great War, their own republic, conquest at the hands of Italy and Germany, the rise of communism, and then finally the overthrow of the communists and the establishment of their own democratic, albeit "slightly" corrupt. The day to day life for most Albanians hasn't changed much in the last century. Life goes on mostly as it had in the past. But while the day to day existence is still as it was before. People don't get the chance to step back and look at the changes, but in those rare moments when they can they marvel at it. No it is not perfect today, but the hope for the future of their own lands is bright.

What does the plight of the Albanian people have in common with us as UC fans? Nothing to tell the truth, nothing more than equally profound ability to not to take the long view, to step back and observe instead of judge. The tendency to be so completely reflective and judgmental about every single 40 minute data point. The performances from game to game really are nothing more than snap shots, for this team in particular the way they played one night never had any bearing on how they played the next night. Nothing made that clearer than beating USF by 26 one night and coming back the very next day and getting housed by 38 at the hands of Notre Dame. To really make sense of what this team did you need to step back and look at just how far this program has come in 5 years.

The situation was grave, just one scholarship player, countless issues on the academic side of the ledger, a fan base angered and disillusioned with the events of the last 12 months, a donor based that turned en mass away from the athletic department and all of this was taking place as Mick Cronin walked in the door. He knew what he was getting into, but I don't think we as a fan base had much awareness of it, and we certainly had no sympathy for his plight. Cronin took the job and set to work straightaway he did all that he could to fashion a team in that first year while working hard to secure this group of seniors in his first full cycle as coach. Now we are sending that group of seniors out, maybe not as winners, maybe not with a whole bunch of records, but we send them off having been a part of one of the biggest four year turnarounds in the history of the program. They will walk off into the sunset knowing that the job is not completely done, but that they have laid the ground work to restore the program to prominence it enjoyed for most of the last decade and a half. So when you think about this year don't be short sighted, take the long view, it will be worth it.