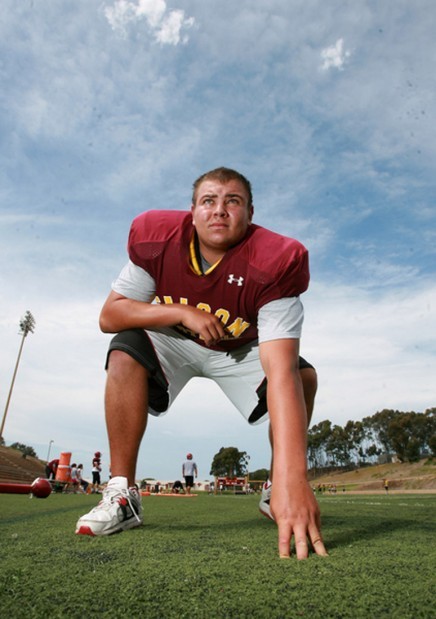 Torrey Pines is something of an all sports power in the San Diego area. But they aren't known for pumping out vast quantities of Division 1 talent. To my knowledge Murray is the first native San Diegan to suite up for the Bearcats. At the very least he is the first guy from that area to come to UC from high school.

Murray took part in a bus tour of guys from the San Diego area that went across the country. He camped at UC and kentucky among others. It is a bit weird for a guy from California to have his only offers come from 2,000 miles away but that's what happened. He picked the Bearcats over the Wildcats in early July. Murray was an All State performer leading the Falcons to the playoffs.

Murray played Left Tackle in high school but will be a guard or even a center at this level. He doesn't quite have the height or arm length to play tackle but is close to ideal for a guard. His footwork is pretty good and he is built very well and is very strong for an 18 year old. But all that strength comes with a trade off because his flexibility isn't great and can be a little stiff at times. The biggest thing that he needs to work on is his flexibility.

Given the instability at the center position Murray is probably the only Freshman O-Lineman that has a chance to push for a spot on the two deep. Unlike Justin Murray and Parker Ehinger Murray doesn't need to put on 30 or 40 pounds to be able to hold up physically. He is already plenty big and strong enough. It would be better for him to take a red shirt this year but the chance of getting to the two deep is there.