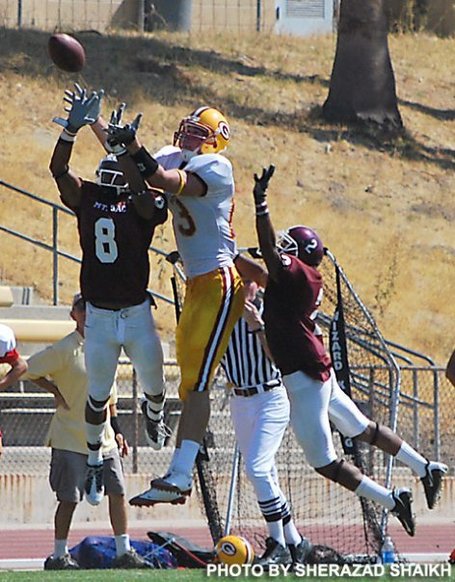 When I first did the post on Murray committing to UC I mentioned that his story is long and somewhat convoluted. He was not recruited out of Junipero Serra High School back in 2008. He went to Weber State for a season where he red shirted before transferring closer to home and enrolling at Mount SAC to perhaps gain a bit more exposure. And that he most certainly did. Murray entered 2009 as a starter at the Mount and Murray had a starring turn for the Mounties State Championship run. That year he picked off 6 passes, broke up 7 more and chipped in 39 tackles with 4.5 more for loss. His work brought in offers by the boat load and 4 star status and he wound up signing with Oklahoma State.

Murray was in Stillwater from January through Spring but things didn't quite work out at Oklahoma State and Murray returned to the Mounties. The season brought more of the same results. Another state championship and another productive year for Murray.

Murray is a big dude for a safety. But he isn't just a down hill player, he makes a lot of plays in coverage. He is smooth in his back pedal and has great hip flexibility in coverage. He reads routes well and breaks very quickly on thrown balls. He is a bit of a ball hawk as his 10 career interceptions for the Mounties can attest. He is a sound tackler and seems to play the run very well. He played some corner and some safety in his time at Mount SAC, but is a safety all the way at this level.

I will be very disappointed if Murray does not start from the onset. Of the safeties on the roster Murray is by far the most talented of the bunch. He might not have the depth of knowledge in the defense that his competition Wes Richardson does. But the enormity of his talent far outstrips that of Richardson. Wes is a good guy and he has a very good Football mind from all that I have heard. But he simply doesn't have the talent physically to make the plays necessary at this level. Murray does. In spades.