Share All sharing options for: Cincinnati Bearcats Football Season Ticket Sales Down 22% In 2011 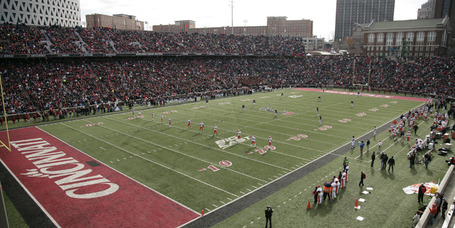 Today the athletic department released somewhat disappointing season ticket sales for the 2011 Football season. To date the Athletic Department has sold 12,348 season tickets. Last years total for season tickets was 15,899. That is a sizable decrease to be sure. But I don't think the news is that terrible, or terribly surprising to be honest.

Given the fickle nature of fans in general in the city of Cincinnati winning sells tickets and that's about it. Unless we are talking about the Bengals, and to a less extent the Reds, the only way to draw, in numbers in this city is to win. Everyone knows that, and just the same everyone knows that 4-8 is not going to cut it. Take it from the horses mouth.

"It’s a sign of the economy and there are a number of factors that go into it but we can only control what we can control and that’s putting a product on the field that people will love to watch. I understand that and our players understand that."

That being said I don't think that the sales to date are really that bad. More to come on this topic shortly.