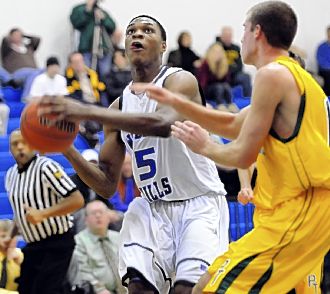 Cincinnati Bearcats Wide Receiver recruit Shakim Alonzo was involved in an on court altercation playing Basketball for Woodland Hills today in which he punched an opposing player. That resulted in the game being called with around three minutes to play in the game.

In the fourth quarter, Woodland Hills' Shakim Alonzo was ejected for punching (Gabe) Pritz in the side of the head. Alonzo had been called for an intentional foul moments moments earlier, which led to the on-court melee that was broken up by security along with Cal and WPIAL officials. Alonzo is a University of Cincinnati recruit.

As of this moment the details surrounding this are trickling out. What exactly transpired is becoming clearer, but is still somewhat murky. But there are still rumors swirling that Alonzo came off the bench to punch Pritz and that he was arrested as well. I have no idea what will happen in regards to his scholarship or his future with UC. There is always a clause in the Letter of Intent and Grant In Aide papers that gives the school an out from their obligation. That clause that could be applied in this situation if Butch Jones chooses to do that. Stay tuned to Down The Drive as the details emerge.