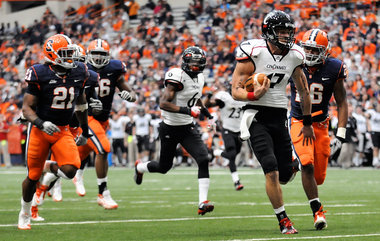 Jordan Luallen is going to be an X- factor for the Bearcats this year. It would be a stretch to say that in the wake of Isaiah Pead the Cats don't have any play makers. There are a host of players on the roster who have a wealth of ability to generate big plays, but little in the way of experience.

Jordan Luallen is one of those guys. He is in pretty rarefied air as an athlete on this team. There are a handful of guys who can match his overall athleticism. Dyjuan Lewis is probably closest. What is more Luallen has proven that he is capible of making big plays (and getting tackled by turf monsters) but still. Mike Bajakian and crew have to find ways to get him involved because he is such a match up problem.-

An early look at the Bearcats Special teams, which is a group that I feel pretty good about. One reason is that most everyone is coming back. All of the guys in the major roles will be back. Pat O'Donnell is still going to be booming 76 yarders for fun, Tony Miliano was good as a Freshman place kicker and is back. Ralph Abernathy IV is back returning kicks and (possibly) punts. And then there are the backups like Anthony McClung, Danny Milligan and so on and so forth.

The only pieces missing from the special teams two deep from the Liberty Bowl are Tom DeTemple at longsnapper and Orion Woodard as resident special teams demon/tackling machine. Those are pieces that need to be replaced, but everyone is back-

Another Reason To Hate The NCAA is not hard to find one. But NCAA president Mark Emmert has managed to do the impossible for me this week. He is making me wistfully remember the tenure of Myles Brand.

Brand at least had the decency to keep most of his crazy out of touch thoughts to himself. Emmert can't keep anything to himself and he is making what is already a difficult job, running one of the largest and most rampantly corrupt institutions in the sporting world and making it appear to be neither large nor rampantly corrupt or out of touch with reality.

Baseball pounds Dayton 17-8, wins for the first time since March 11th....Bearcats world wide! dozens of past UC players are earning paychecks for their hoops skills all around the world...La Salle linebacker Joe Burger considering preferred walk on spot with UC...DePaul doesn't want to be DePaul like anymore considering building a new arena