Munchie Legaux, Brendon Kay and the Joy of Black Boxes

Share All sharing options for: Munchie Legaux, Brendon Kay and the Joy of Black Boxes 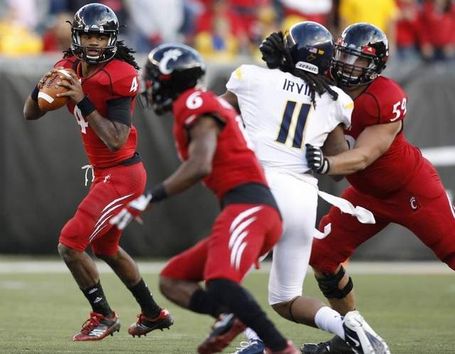 Black Boxes are fun. They are easy to hide, easy to conceal and the contents of them are generally whatever you want them to be. This is the time of the year for a great black box story or symbol to pop up. Its the off season. There is literally nothing of substance happening at the moment. So in a story as old as time people latch on to things that aren't really real and puff them up. For UC the black box of this off season is without a doubt Brendon Kay.

There is a grassroots movement for Kay to get the starting nod over Munchie Legaux this season. Let's state the obvious here. I don't particularly care who starts, I just want the Bearcats to win games. That's the sum total of my rooting interest in this "competition." I do think that UC is capible of winning with either guy taking snaps. My problem with this notion of Kay as the answer to the offense's prayers is that it came out of nowhere.

Brendon Kay is a reasonably talented guy. But his talent isn't so overwhelming that you just assume that he will figure it out on the field with no (and I mean zero) experience. I will be the first to admit that Munchie did not set the world on fire in his three relief starts against Rutgers, Syracuse and UConn. I guess it was a kind of fire, but not the glorious, rapturous variety of everyone's dreams. It was more like this kind of fire. But those three games are not indicative of his potential as a quarterback in much the same way that Zach Collaro's four game sojourn as the starter in 2009 did not predict how he would fare as the guy in 2010.

The difference between Collaros going into 2010 and Munchie going into 2012 is that the expectations are nearly polar opposites. Everyone was convinced that Zach would parlay his electrifying run into a dominate season. It didn't quite come off that way. Zach had good numbers that year, but not of the volume that everyone anticipated, and to top it off the team bottomed out.

Flash forward two years and the expectations are low for Munchie in general but among the skeptics it is bottomed out. Based on the available information we as fans have I can see the point those backing Kay are trying to make. They see Munchie as a fixed quantity. He threw for 749 yards, completed 47 per cent of his passes and had 5 TD's against 4 INT's. None of those numbers are particularly good in a vacuum, and the assumption is that he can't improve, not dramatically enough to give them confidence in him.

And for those who posses this opinion Brendon Kay is the perfect foil to Munchie. Because there is nothing real there. There is no prior experience to hold up and marvel at or indeed to express horror at because Kay has never taken a meaningful snap. In this case the thrill of the unknown trumps the fear of the known. It's easy to look at what Munchie did last year and say that Kay can do better. In truth Kay probably can do better, but I don't understand why Munchie couldn't as well.

That's why Legaux's numbers need context. If you go back and watch games from last year, particularly the passing game one thing jumps out. Outside of the screen game everything took place outside the hashes. I always point to this play as a personification of the concept. There is a reason for that, and it centers around Zach's physical limitations. Let's just face the facts Zach is short and doesn't have the greatest arm strength but he is mobile, smart and accurate. The most important of those is accuracy. Mike Bajakian went to work before last season and designed an offense that catered to the strengths of his quarterback. They kept the passing game outside the hashes and emphasized fitting the ball into tight spots because those were/are the throws that Zach is best at. The middle of the field (at least the area's between the line of scrimmage and the first down marker) was abandoned.

Flash forward to November and Munchie Legaux is now the starting QB. His strengths as a passer, his height in the pocket, his touch on passes over the middle and his big arm are the opposite of Zach's. For the Rutgers game Mike Bajakian and Butch Jones just put Munchie in Zach's offense and expected the best. They got the worst. It never occurred to them to change things up to put Munchie in an offense built for him to succeed.* When they did start changing the offense to suit Munchie good things did happen. That's why he won 2 of 3 starts despite completing 47 per cent of his passes and having a TD:INT ratio of 1 (more or less).

*That's not fair, in truth it most likely did occur to them to reconfigure the offense. But with the limited practice time in college football retooling the essence of an offense in a standard gameweek is next to impossible. That's one of the biggest reason why college teams just do what they do week to week rather than coming up with scores of opponent specific adjustments as you commonly see in the NFL. Coming up with the adjustments isn't the issue for college coaches, finding the time to install the lot is.

It seems that the question being asked of those in favor of Kay is which QB can do better than a 47 per cent completion percentage and a 1 to 1 TD:INT ratio? That's the wrong question to ask because the answer to the question is both. The question you should be asking instead is the one I am pretty sure Mike Bajakian is asking himself every day is this. Which guy brings more to the table for the offense if I choose to build it around him?

The answer to that question is Munchie Legaux because it is about more than the passing game with this offense. Munchie does more on the ground than Kay. He is a legit gamebreaker as a runner. remember? And as Munchie showed in the 1st half of the UConn game he is capible of beating a defense with his arm. That first half was the best half by any Bearcat QB in 2011. Just for a refresher his first half line for that game 12 of 18 for 163 yards (9 yards per attempt) with 2 TD's and 1 INT and he chipped in with 19 (23 pre sack) yards on the ground on 4 carries. From my perspective the long and short of it is this. Munchie brings more capabilities to the offense than Kay does. By all accounts Kay is a pretty good passer, but this offense is best when the QB is a threat to run the Football and Kay is not. For me that's why this is Munchie's job to loose.