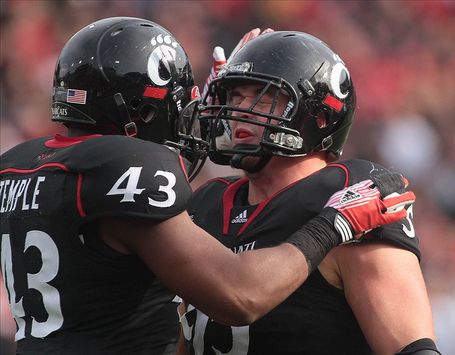 The first Bearcat is off the board. Derek Wolfe has been selected by the Denver Bronco's with the 36th overall pick and the 4th pick in the second round. Wolfe is a good fit for the Bronco's defensive scheme. The Bronco's are ostensibly a 4-3 team under John Fox, but they do mix it up in terms of fronts, often resembling a 3-4 team in alignment.

Derek is a value pick for them because he can play as a traditional 4-3 defensive tackle but he can also play outside as a run stuffing defensive end when they switch to their 3-4 looks, often on passing downs where Wolfe is the most dangerous.

Wolfe is now the third highest draft pick in UC history just missing out on the first round by four spots. I happen to think that Denver is one of the better situations for Wolfe to be in because the kind of defense that the Bronco's favor is a good match for his skill set. Congrats to Derek.