Who Replaces John Hughes For The Cincinnati Bearcats?

Share All sharing options for: Who Replaces John Hughes For The Cincinnati Bearcats? 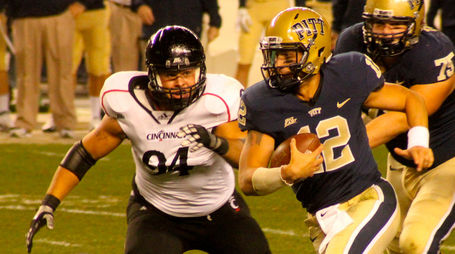 The Cincinnati Bearcats have some pretty big holes to fill on the defensive side of the ball. Derek Wolfe and John Hughes were both selected within the top 100 picks of last weekends NFL draft. The question that everyone asks is who steps up for the both of them?

The easy answer is to say that it is a bunch of people, and it will be, the production lost by those two guys will be picked up, to some extent by other people along the defensive line. But that is an abstraction. It's true, but it's not the whole truth. John Hughes has moved on and his position as the Nose Tackle will be passed to a new Bearcat, Jordan Stepp

Stepp was the third tackle in the rotation last year filling in for both Wolfe and for Hughes, though he was ostensibly Hughes back up, and that's where he spent most of his time. On average Stepp played between 15 and 20 snaps per game which is a pretty healthy workload for a reserve defensive linemen.

Related Who Replaces Derek Wolfe for the Cincinnati Bearcats?

Stepp also has a lot of experience for a guy with just one career start to his name. He has played in each of the last 24 games and was the primary (read: only) back up at defensive tackle for the last two seasons. Stepp has compiled 53 tackles, 5.5 TFL, .5 sacks and a forced fumble as a reserve the last two years. So contrary to popular opinion the Bearcats aren't throwing a noob to the wolves.

Related How Do You Replace Derek Wolfe and John Hughes

Returning to the abstraction and a point that should be made. If the style of defense remains the same in 2012, and all indications are that the play calling will be in the same vein the burden of replacing 121 tackles, 34 TFL and 14.5 sacks* won't just be on Camaron Beard and Jordan Stepp. The beauty of the defense last year was that it created and exploited mismatches up front. As I see it the only difference between last year and this year are where the mis matches are likely to come to bear. Last year it was obviously inside, this year it will be about finding mismatches for Walter Stewart, Dan Giordano and to a certain extent Brandon Mills. With that in mind it isn't important for Stepp and Beard to match the production of Hughes and Wolfe. But it is important for them to allow the system to function.

* That was Hughes and Wolfe's combined production last year