Share All sharing options for: John Marinatto Steps Down as Big East Commissioner 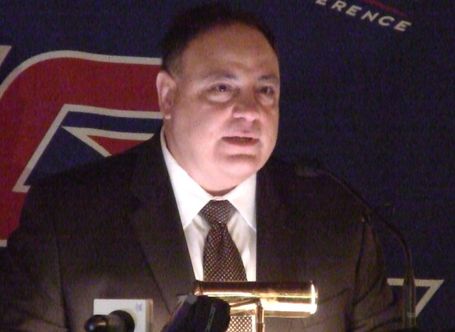 John Marinatto is out. The move is not surprising in and of itself. Marinatto was in far over his head from the moment that he took over the top job from Mike Tranghese. His ineptitude can best be summed up with this quote.

"I don’t think anyone could have predicted the things that happened in the last 36 months with realignment and how disappointing it is to find people who you trust and had relationships with suddenly become untrustworthy. It’s discouraging and disappointing and it’s not part of what you think intercollegiate athletics or higher education is about."

Only a willfully ignorant person could think that the events of the last 36 months came out of left field. Keep in mind that this is a guy who was part of the league hierarchy when Miami, Virginia Tech and Boston College abandoned the Big East the first time. How anyone who lived through that could find the events of the last three years to be a bolt from the blue. Being the commissioner of the Big East is a tough job. But Marinatto was so far in over his head and so utterly clueless that he may as well have kicked his own ass every morning before heading into the office.

For what its worth President Williams is in charge of finding his replacement.