Share All sharing options for: Drive by Drive | Cincinnati Bearcats vs Austin Peay 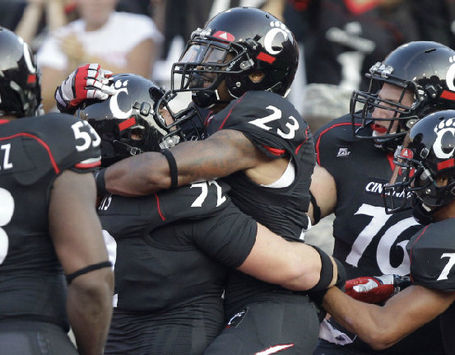 We are all officially in the darkest four months of every calendar year. The four months between the end of the Bearcats season on the hardwood and the start of festivities in Nippert Stadium. This is also the four worst months of the year for Bloggers. Seeing as there are no sports to cover, (unless you want to talk about the fledgling Baseball team), the only content that exists is the things we choose to write about. There are a couple of features in the wing to bridge the gap one of which is what follows below, a drive by drive look at all 13 Football games from the 2011 season starting with the season opening contest against the Austin Peay Governors.

Whatever intrigue existed in this game between UC and Austin Peay was evaporated within 18 seconds. First Ralph Abernathy IV took his first collegiate touch 60 yards on the opening kick. Next Isaiah Pead took his first touch of the game 40 yards on one of his patented cutback specials. Tony Miliano missed the extra point UC 6 AP 0

Play of the Drive Since there is only one play on the drive its obviously Pead's sprint. His first touch TD was a sign of the season to come.

The Gov'nah's actually showed some fight early in the game picking up three first downs. AP QB Jake Ryan completed 3 of 4 passes for 24 yards and generally looked competent in his first bit of action. It didn't last.

Play of the Drive: J.K. Schaffer was gifted an interception after Ryan's pass went through the hands of Peay's back up RB Wes Kitts and right to Schaffer. J.K. returned the pick 11 yards setting UC up on the Peay 48.

After taking possession of the ball UC bombarded the Peay defense with the passing game to little result. Zach Collaros was 2 of 5 for the drive completing passes of 10 and 13 years to Pead and Anythony McClung respectively. The latter of which set the Cats up with first and 10 at the 13. Pead took it from there UC 13 AP 0

Play of the Drive: Pead proving that he was better than Austin Peay again.

Play of the Drive: Walter Stewart breaking up a pass on 3rd and 2.

Pead and George Winn ripped of runs of 24 and 8 yards on the first two plays of the drive. After that the offense stalled failing to pick up two yards on three plays giving up possession on the Peay 38.

Play of the Drive: There are actually two of them. On second and 2 and again on fourth and 1 Bajakian tried to utilize Zach Collaros as a power runner. It didn't work. This is something of a theme from the season. As 2011 wore on Pead and Winn took over that part of the running game.

The drive went like this. Sack by Chris Williams, run of 6 yards, sack/fumble by Derek Wolfe recovered by Maalik Bomar

Play of the Drive: Its the strip sack of Ryan by Derek Wolfe turning in his first big play of the year

Another short field and another easy TD. Statistically the Bearcats offense wasn't great in 2011, but they made a living off short fields. Zach was 2 of 2 on the drive including a 13 yard strike to Kenbrell Thompkins for his first score as a Bearcat. UC 20 AP 0

Play of the Drive: The first play of the drive. Right off the turnover Bajakain called up a reverse on the unsuspecting Gov's. D.J. Woods raced for 24 yards before being tripped up.

Nothing, just nothing at all for the Govs

At this point the foot was off the accelerator and the Bearcats were in cruise control.At this point Isaiah Pead was done and Quatro, Winn and Poteat got the carries. Zach went 5 of 8 for 60 yards and the score to D.J. Woods.UC 27 AP 0

Play of the Drive: The deep pass to Woods.

Peay managed three first downs, but traversed just 28 yards in total. But a couple of penalties set them back as they failed to cross midfield.

Play of the Drive: On third and 10 Walter Stewart pressured Ryan into a throw that J.K. wound up breaking up

This drive was the first appearance of the wildcat on the season for UC. Jordan Luallen subbed on three plays, all runs for 8,9 and 8 yards before subbing back out as Zach threw a TD on a textbook smash concept to Anthony McClung UC 34 AP 0

Play of the Drive: McClung. Smash.

After Adrian Witty forced a fumble on the ensuing kickoff. UC ran two plays to little success before a bust in the Gov secondary parted the red season for McClung to pick up his second in the span of about 30 seconds. UC 41 AP 0

Thus ended all relevant action for this game, and with it my coverage of the game which stops when the second string goes in. If you wish to see all the greatest hits from the second half such as Adam Fearing Scored, Munchie Legaux has Dreadlocks and Jordan Luallen is Athletic ESPN's video archive for the game is available here. Stay tuned for the next edition which will be the bloodletting against Tennessee.