American Athletic's Conference Contributions, Cincinnati Isn't Ahead After All

Scale. Its always puts things into perspective, even if it is a completely arbitrary perspective. But it does matter, and it matters in this case because UC is not as far ahead of their new conference mates as we would like to think. At least off the field.

Share All sharing options for: American Athletic's Conference Contributions, Cincinnati Isn't Ahead After All 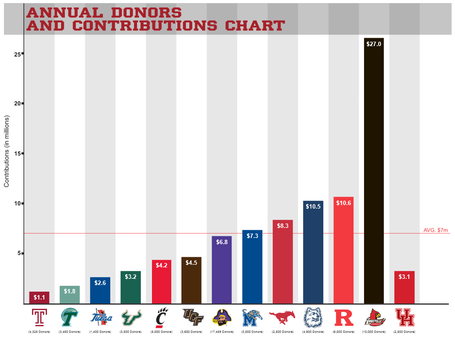 This comes from the good folks over at r/cfb*. That is the current, as of 2012. As much as UC fans loved to carp about Memphis, East Carolina and Central Florida bring to the table their fans do tend to bring it with their wallets at a slightly higher clip.

* the actual figure comes from Houston's donation propaganda where I am sure they are on the look out for money to finance their nifty new stadium.

This blog will cop to hammering people about the face on the need for UC to grow its contributions. But there is a reason for that, it is very difficult to consistently do more with less. The Bearcats have lucked out with Mick Cronin, a Cincinnati guy who wants to be here until he is done coaching, even though he could easily gas up the price. On the Football side of the equation UC had an unreal hot streak in hiring Mark Dantonio, Brian Kelly and Butch Jones to establish the Bearcats new trajectory, and have now hired Tommy Tuberville to maintain it.

In college sports in general UC has fallen behind, way behind, but even amongst the Bearcats new peers they aren't even ahead. If you take out the figures for Rutgers and Louisville's Taco Bell and Papa John's fueled coke binge the Bearcats are still below the league average. Nippert's renovation will change the financial model, and will certainly increase annual donations*. But if UC ever wants to shift conferences again this is the area where the fans have to show it.

*All of the new seats will require annual donations, donations of varying amounts and durations.