So, no more of this then

To be honest I am not at all surprised that Lance Stephenson is taking his game to the NBA after 34 games in a UC uniform. I don't know how anyone who has read much about his past could be. From the age of 14 his overriding ambition was to make it to the NBA. Now he has his chance, and just before a potential lockout or a new Collective Bargaining Agreement that will surely include much lower rookie salaries. Lance is doing the right thing in my book, the talent is there for everyone to see. There are some things that he needs to work on to become a staple of an NBA rotation, primarily his jump shot and decision making/shot selection. And it is pretty clear as well that he wasn't properly utilized in the confines of the UC offensive system. Lance is a great slasher and finisher of the Basketball who played in a system that values post play and perimeter shooting. I am not sure who gets the blame for Stephenson launching two threes a game while shooting a robust 21 percent, either Lance or Mick, but it is safe to say that wasn't the best use of Born Ready's prodigious talents on the Basketball court. This is not going to turn into a condemnation of Mick Cronin and his tenure. I think Mick fell well short of what this team was capable of, but that is a subject for another time and another place. One area in which Cronin has helped Stephenson is on the defensive end of the court. I watched Stephenson a couple of times in high school and his defense at that point would have to be considered poor at best. But as the season progressed he made tremendous strides on that side of the ball. By the end of the season I thought he was pretty clearly the best on ball defender on the team. He still had mental lapses and breakdowns that could lead to buckets but when he was on and focused he was nearly impossible for most guards to get by. But his effort was way, way up. It might sound like a cop out to say that improving effort can make someone a better defender. But with the massive assortment of physical gifts that Stephenson has improving effort will improve production. All in all the Lance Stephenson Experiment was a mixed bag for all parties involved. UC didn't quite take that next step in the Big East pecking order, but I fell confident in saying that UC would not have won 19 games without #33 in the lineup. For Stephenson he leaves a much improved defender, a battle tested competitor, but still an unpolished bundle of kinetic energy on the offensive side of the ball. In all honesty another year would serve him well, but I get why he is departing at this point in time. It is sad to see him go, even if it wasn't entirely unexpected. 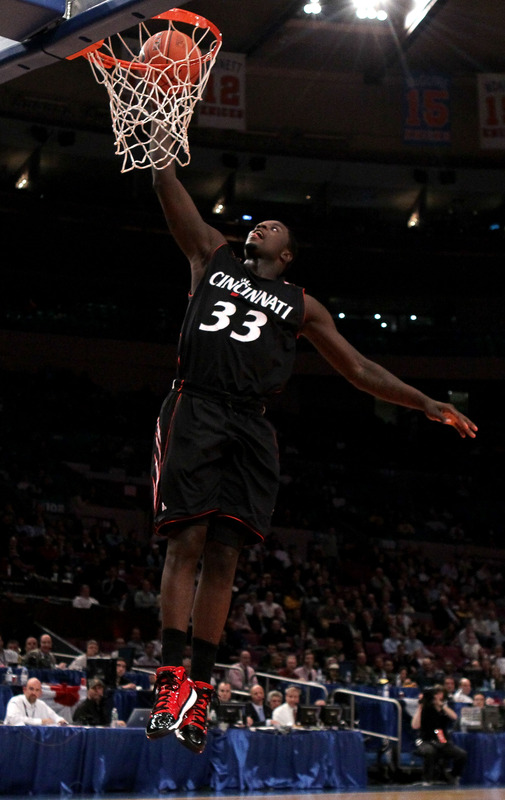 peace out Lance, it was fun while it lasted