Rivals released their list of the top 250 prospects for the 2011 class today. Included within is one Bearcat commitment. Hamilton Badin Quarterback Patrick Coyne who checks in at number 215. 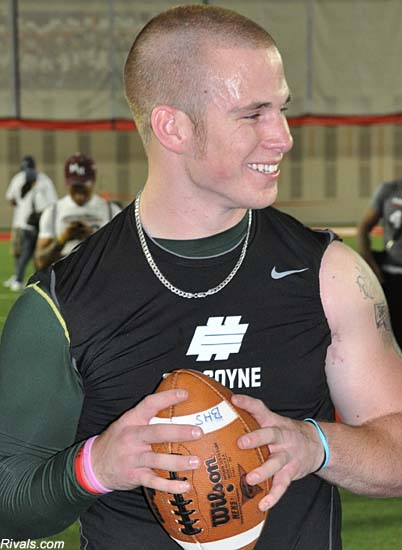 I was high on Coyne when he first commited in late March. I thought he was a good talent with a very strong arm who is a good fit for Butch Jones's offensive system which utilizes QB's as power runners, in addition to their passing abilities. Originally I though he was going to get three stars from the recruiting services with an outside chance at a fourth with a strong senior year. But after his strong performance at the Elite 11 Regional in Columbus I thought he was a safe bet to get that fourth star with a good shot of making the Elite 11 camp in July and by extension the Rivals 250. It turns out that I am half right so far. I know there is a sizable portion of the UC fan base that doesn't pay much attention to recruiting rankings until signing day, if at all. But here is the basic information you need to know about Coyne, he is the best QB that UC has recruited to date.