Looking Back: The 2009 Defense

Share All sharing options for: Looking Back: The 2009 Defense

The time when this blog will start to be all Football, all the time is rapidly approaching. The opening kickoff on September 2nd against Fresno State is 90 days away. But before you can look forward you have to look back. The purpose of this is to evaluate the performance of last years defensive unit according to various statistical measures. When most people look at team statistics on the defensive end they almost always evaluate teams based on four statistical measures. Rushing yards allowed per game, passing yards allowed per game, total yards allowed and scoring defense. In totality those four statistics can give you a good idea where any team stands as a defensive unit. But the picture that those statistics paint is often incomplete. To carry the analogy further the "Big Four" statistical dimensions are a sketch set down by the artist on a blank piece of canvas. You get the general impression of where the piece is going, but the final outcome is still more or less a mystery whose final shape has yet to be revealed. There are other statistical categories which serve to fill in the blank spaces on the canvas. Going beyond the four basic categories are a multitude of statistical dimensions available for viewing. But there are a few that are under reported that actually give a more complete picture of how a given defense performs. I will get into more detail about those measures later on. For now it is the "Big Four."

So there is your sketch and I will be the first one to admit that the chances of achieving aesthetic perfection from that sketch is next to zero. But the point isn't be the perfect, but to be a effective. I am probably in the minority here but I do view last seasons defense as being effective and I will show you why. When you look at statistics you should always attempt to glean how a given statistical measures increases or decreases probability of winning. For example look at scoring defense. Last year UC allowed 23.1 points per game. That is a pretty average number, but it is impossible to determine whether that performance on its own increased or decreased the probability of winning. That number sits in a vacuum, and since points are allocated during the course of a game in a more or less arbitrary way that 23.1 number is just a starting point. There are other statistics available to determine the overall effectiveness of a defensive unit than the Big Four. The defensive stats which give a much clearer indication of the overall performance of a defense are takeaways, sacks, passing efficiency defense and yards per play allowed.

Just like the name implies takeaways are any time that a defense takes to ball away from the offense via a fumble recoveries or interceptions. The reason why I place a great deal of emphasis on this stat is that it is pretty much the only way available that you can statistically measure how opportunistic a team is. The best teams in the country are always opportunistic by nature. Football is a game of inches, half chances and 50/50 plays the only way to get an idea of how a team stacks up in those regards is how the generate turnovers. Last years defense had 19 takeaways which was 79th in the country and 7th in the Big East. Those numbers aren't good the 16 interceptions is, but 3 fumbles forced is far too few. Going back to 2008, 22 was the number 66th in the country and 4th in the Big East. The 2007 team was prolific at forcing turnovers gaining 42 of them which was 1st in the country and conference.

Sacks are an important stat for one reason. The variations on the spread offense are becoming ubiquitous in college football. Those various offenses put so much pressure of defenses. It is nearly impossible for a defense to sit in coverage for more than 3 seconds without breaking down. Placing the QB in the shotgun increases the time he has to read to defense and make a decision. The only way to effect those various spread schemes is to get to the QB before your three seconds are up. And the only way to measures how effective a defense is at doing that is to look at Sacks. In this respect UC played very well and the stats back that up. 37 total sacks ranking 8th in the country and 3rd in the Big East. Those compare favorably to the 2008 defense, 40 total 5th in the country and 1st in the Big East, and 2007, 42 sacks 6th in the country and 1st in the Big East.

Passing efficiency defense is a superior statistical measurement to passing yards for a couple of key reasons. Passing yards are one dimensional and don't measure effectiveness. If a QB throws for 250 yards and a TD most people would say that is a good game because 250 yards is quite a bit and TD's are key for the average person to understand the position. If the total stat line read 11 of 26 for 250 yards with 1 TD and 3 INT's that good game suddenly looks pretty average. Pass Efficiency Defense takes the entire state line into account, not just the yards and TD's which makes it a superior measure of a secondary's effectiveness. In 2009 UC had a PED of 128.38 which is 58th in the country and 6th in the conference. That is a pretty large step down from the 112.30 posted in 2008 which was 27th in the nation and 3rd in the Big East. It's also pretty far off from 2007 which went for 115.59 the 34th best number in the country and 6th in the conference.

The last stat, and in my book the most important one, is yards per play allowed. This stat is, in my opinion, the most complete metric available to study a defense. The reason why it is so important is that it measures down to down consistency of an entire defensive unit. There is a big difference in quality between a defense that allows a team to rip of 7 or 8 yards at a snap and one that gives up an occasional big play but allows just 4 or 5 yards per snap, even if their total yardage allowed is identical. This past year UC gave up 5.2 yards per snap which was 43rd in the country and 5th in the conference. In 2008 it was 4.7 per play ranking 18th in the country and 3rd in the Big East. In 2007 split the difference with a 5 yards per snap average which was 32nd in the country and 5th in the Big East.

The reason that I included the numbers from 2008 and 2007 as points of reference is pretty basic. That group of guys was more or less unchanged from one year to the next. They started multiple years together as a unit. The spine of the defense was more or less the same both years. Terrill Byrd and Adam Hoppel up front, Ryan Manalac and Corey Smith at linebacker and DeAngelo Smith and Mike Mickens out on the corners. That group logged a lot of game action together during their careers and their statistics got better and better as their careers progressed to the point in 2008 when they formed the core of arguably the best defense in school history.

But here is the key, all of those guys departed at the same time and the defense had to reboot. 10 brand new starters last year, most of whom had never played extended minutes at this level. It was inevitable that the numbers would fall back a little bit, the statistics do bear that out, both in the traditional metrics, and the ones that I pay attention to. The defense last year did not fall off a cliff, which seems to be the line that everyone is pushing going into this season, they just went from being great to average. The most common refrain I have heard from the preview people is that UC has to replace X number of starters. While true, in my eyes, that's not the story of the defense going into the fall. The story is that UC went into last season with exactly one player with a proven history of productivity in Aaron Webster, but they left it with a defensive spine of young, battle tested and proven producers. Think about it, the core of the defense is going to be the same for the next two years. Derek Wolfe and Brandon Mills up front, JK Schaffer and Walter Stewart at linebacker, then you have Drew Frey and Dominique Battle in the secondary. I will be the first to acknowledge that the work done by the defense this year is far from a masterpiece. But it never was going to be, and it wasn't intended to be either. So don't judge last years group by that standard. Instead look last years group as the first published work of a prodigy. There were moments of brilliance, even if the overall quality was lacking. 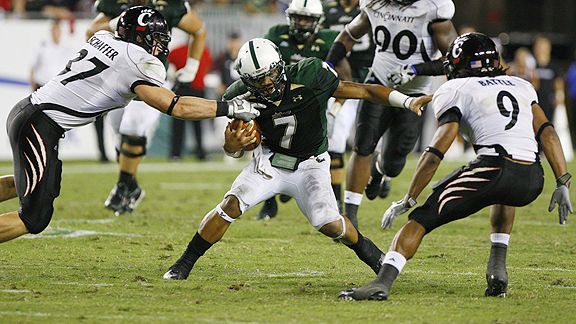