Bearcats Football Season Wrap, The Importance of Third Down

Share All sharing options for: Bearcats Football Season Wrap, The Importance of Third Down

Stats by their very nature are very mailable concepts. Having good stats doesn't mean that the team is actually good, just that they have good stats. Ultimately stats are like money. They do not posses, in and of themselves, any value what so ever. The actual value of a 20 dollar bill is not 20 dollars, it is the value of the paper, and the ink applied to it. In the same way stats devoid of context are meaningless. But there are some statistical measures that matter much more than others to me. One of the stats that I place more importance on is the turnover margin, which I touched on the last time out. Turnover margin is the stat most likely to determine the outcome of a game than how many yards a team runs or passes for. The other stat that I find is helpful in determining the outcomes of games is how a team does on third down, both offensively and defensively. Knocking opposing offenses off the field while keeping yours on is one of the most elemental attributes of any winning team. UC was very much a mixed bag in that category, really good on offense and below average on the defensive side of the ball.

Lets start off on the defensive side of the ball. This year UC was 82 in the country allowing teams to convert on 42.29 per cent of their third down chances. That is by far the worst number in the last five years. In fact the last two years have been the highest in that five year span. 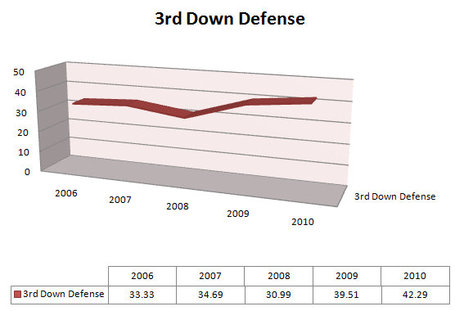 Not surprisingly the performance of the defense over the last two seasons has been the worst since Mark Dantonio started breaking in a wave of freshmen a sophomore defenders in the 2005 season. That was when guys like Terrill Byrd, Deangelo Smith, Mike Mickens and Cory Smith first cut their teeth on the way to forming the core of that 2008 defense which was one of the best Bearcat defenses of the last 10 or 15 years.

While the issues with this defense were most apparent on those third down plays when the team would struggle to bear down and punch opposing offenses off the field, the problems started much, much sooner than that for the Bearcats defense. It started on 1st down. The first down defense for the year was dreadful.

When a defense gives up almost 6 yards per play on first down they are just done. There is almost nothing that can salvage that kind of situation. The only conceivable way to consistently dig a defense out of a hole like that is the force turnovers a high rate, that didn't happen this year, or to generate a lot of negative plays in the form of Sacks or Tackles For Loss. UC had 26 Sacks on the year which wasn't that bad, but it should be noted that seven of those came against Rutgers, one of the worst offensive lines in recent memory. In terms of TFL's UC amassed 77 on the year which was good for 43rd nationally. But those numbers just don't cut it given how bad this defense was on first downs. To put the situation in other terms almost every time the defense lined up on second down the opposing offense had less than five yards to go. Two downs to stop an opposing offense from getting a little over 4 yards is damn near impossible because the median yards per play for an offense across the entirety of College Football this year was 5.92 yards. Any defense is going to struggle if they can't force opposing offenses into 3rd and long situations, and that was a big factor in the UC defenses third down woes. It is neigh on impossible for any defense to succeed over the course of a season if they are repeatedly put in the position of having to withstand 2nd and 3rd and short. That was the biggest issue from my perspective.

On the other side of the coin the UC offense did a pretty admirable job of converting third downs and staying on the field, particularly later in the season after the problems on the offensive line were downgraded from "Oh my God, this is a huge fucking issue" to manageable inconvenience. The passing game on third down, while not as incomprehensibly good as last years, was above average to good for most of the season. There were times when Zach Collaros got greedy and made some terrible decisions, his lone pick against Rutgers and basically every 3rd down in the UConn game spring immediately to mind. But, all in all, Collaros on third down was about as good as you could hope for from a guy getting his first sustained action as a starter. He threw a few to many picks on third down for my liking, but he made some big plays as well.

The only big, overriding issue with the offense on third downs was how Isaiah Pead was by and large left out of the mix. That my friends is an exceedingly stupid thing to do. Isaiah Pead is by far the most explosive player on offer for this offense. He became the first Bearcat since Richard Hall to rush for over 1,000 yards in a season, averaged 6.5 yards per carry and 6.8 per touch. Here fun little stat to prove the point. Last season, under Kelly, Pead touched the ball 13 times on third down for the season. That happened under the Kelly offense, an offense where he was far beyond an after thought in the grand scheme of things. This year in an offense that was tailor made for Pead, and one that extensively featured his skills on a week to week basis Pead only got 11 touches on third down for the season. Something about that seems quite stupid to me.

UC had its fair share of issues on third down this season. But there are plenty of reasons for me to think that this team is going to get better at this important facet of the game. The biggest reason is the youth of the team. Young teams rarely do well at these sort of intrinsic, under the radar aspects of the game. It takes a lot of repetitions for a team to just instinctively get the finer points of playing the money down. The other reason why I think there is going to be a big improvement is that this coaching staff is only going to get better the more time they spend with this team. Its hard to imagine the coaches overlooking Isaiah Pead on third downs again after seeing what he can do for a year.