Isaiah Pead: The Crux Of It All

Share All sharing options for: Isaiah Pead: The Crux Of It All

This is something that I mentioned very briefly when looking at the offensive performance from Saturday, but I think that it merits a deeper look. Isaiah Pead is the most important person in this offense, and will be for the remainder of the year. That was not the narrative heading into this season, almost everyone had come to view Pead as an auxiliary weapon on an offense stacked with play makers in the receiving core, as trusty side arm to supplement your regular assault rifle. Four games in that narrative that was supposed to rule the day can officially be put to bed. Isiah Pead is now the main gun for an offense that still has the chance to be very, very explosive down the stretch. 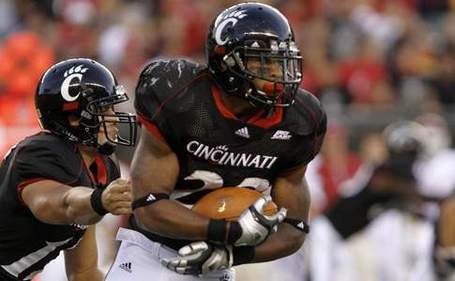 A big reason why Pead was overlooked coming into this year has a ton to do with the previous staff. Pead was far and away the most under valued, and under utilized weapon on the team last season. On the face of it that seems a bit strange. After all he gained 800 yards and scored 9 TD's on the ground, and added 200 yards receiving and 2 more TD's in the passing game. The production wasn't the issue, it was the infrequency with which he was used last season. There is statistical measure in economics called usage rate, which measures the frequency with which an item is used or visited. It has also been applied most famously by John Hollinger to the labyrinthine world of Basketball statistics. Unfortunately there is no similar, easily calculated number in Football, primarily because of the complexity of a given play. On each snap there are 22 moving parts, which makes tracking the cause and effect of any given player had on any one play infinitely more difficult than in Basketball, which has just 10 moving parts, which scales back the complexity quite a bit. Regardless, when it comes to Football there are two main statistics that I pay attention to, yards per play and touches per game, one speaks to the effectiveness of a player, the other to the frequency with which they were used.

Last season Pead finished 2nd on the team in all purpose yardage to Mardy Gilyard, granted it was a very distant 2nd, but 2nd none the less. He finnished the season averaging 7.1 yards per play, 6.7 per rush. Obviously he was effective when touching the Football. But it is the attempts per game statistic that really illustrates how infrequently he got the Football. Between rushes and catches Pead got the ball 141 times last season in 13 games, that works out to just under 11 touches per game. Basically Brian Kelly had 7 yards in his pocket almost any time he wanted it, but he only went to it, on average, just 11 times a game. An average that was skewed upward by two games, Syracuse and West Virginia, where Pead got 17 and 20 touches respectively. Given those circumstances, it is very difficult for an outside observer to understand just how explosive a player Pead can be, that's why he was by and large overlooked in the preseason, despite repeated statements by Butch Jones that he would make a much more concerted effort running the Football.

The sample size is small, just the Oklahoma game in which Pead was healthy and running behind and offensive line that was effective, but the results were so startling compared to the previous three games. In terms of averages over the course of an entire games worth of plays 6.6 yards per play, set against an average of 5.2 for the other games is substantial.

People also need to take a look at the skill sets of the various position groups and players to see how they fit in. The offensive line as currently configured with Alex Hoffman playing that RT is basically four guards and a tackle. Sam Griffin is the lone natural tackle in the bunch, C.J. Cobb, Randy Martinez, Jason Kelce are all natural guards. Kelce and Hoffman have shown that they can play at other spots on the line. However, there is a reason why both of them were all conference picks a year ago a guard. Don't get me wrong, I still think that this offensive line can be very productive, but as on offense they have to play to their strengths, and up front and.... Well lets put it this way, there is a reason why the line is still dead last in the country protecting the passer (hint, four guards).

In the receiving core, there is an abundance of tall, lanky players most of whom were recruited by Brian Kelly to play in his offense. Kelly's offense was all about the vertical passing game, literally all about it, every thing was derived from vertical stems, and he recruited accordingly. Now that Jones is in charge those big, lanky possession receivers like Armon Binns are at a bit of a disadvantage. The Jones passing game places emphasis on being able to play in space and allowing his receivers to make plays with their short area quickness. I love Binns, but he isn't exactly bubbling over with short area quickness. That's why D.J. Woods has become the focal point of the passing offense, he plays in the slot, the hot corner of this passing offense, has a the ability to make defenders miss in tight spots and he can beat man to man coverage. The offense so far has not gotten Binns that involved to date, he is a distant second to Woods in Catches, Yards and TD's. He, and most of his position mates, are at their best when they are going vertical in the passing game. But with Jones the only chances they get to do that is on play action passes when they can run the type of go's, seam routes and deep crosses that give them an advantage over DB's

Finally there is Zach Collaros. Zach can be a tremendous QB, but for most of this season Jones has asked him to set up in the pocket, read defenses and make the correct decision. Zach can do that, he is still completing 60 per cent of his passes and has just one pick to his name, but asking him to do that doesn't maximize his effectiveness. His decision making process in the pocket seems to bit a touch more long winded than when out of it. Combining the extra quarter of a second he is taking to make decisions, with this offensive line and what you wind up with is variations on a theme, this theme:

Beyond the obvious issues protecting Collaros is the fact that Zach looks far more comfortable outside the pocket than in it. He seems to make quicker decisions, throw more accurate balls and is just plain better off play action or when they roll the pocket to get him on the perimeter of the defense. He just plays with a bit more confidence and swagger out there than in the pocket. Look at Saturday's performance, all three TD's came from outside the pocket either on designed rolls, play action(Adrian Robinson) or insane play action. Any way you slice it if the goal is to maximize the effectiveness of Collaros, you need to get him outside the pocket, to do that the most frequently and most successfully that means getting Isaiah Pead going on the ground.

That is the key for the season on offense. This offense can achieve devastating levels of effectiveness, but to do so Pead needs to be successful running the Football. The peices are in place for that up front and in the rest of the offense, it is just a question of making it happen from this point.