Damon Julian Latest Addition to the Class of 2011

Share All sharing options for: Damon Julian Latest Addition to the Class of 2011

Damon Julian a Wide Receiver out of Peirce Community College in Los Angeles is the latest addition to the Bearcats recruiting class. Julian stands 6'3" and weighs in at 215 pounds. In 10 games in 2010 Julian hauled in 57 passes for 1073 yards and 11 TD's. Julian is given three stars by rivals and has yet to be evaluated by rivals. The fact that Jones is taking a WR, a JUCO no less, points the way to a couple of possibilities. 1) Jones and the staff aren't all that confident that all the commited WR's are going to sign with UC, Alex Chisum has been a soft verbal for a while, Rodriguez Coleman is a long shot to qualify, and Max Morrison is a Grey shirt and won't be a part of this class anyway. So the possibility is there that this 5 WR class could become 2. This is also another position that is lacking depth and while I have confidence in some of the freshman making the rotation, none of them are sure bets. 2) At least a couple of the current commits who are being floated as slot receivers/running backs will be moved over to defensive back. My guess would be Akise Teague, he has his heart set on running back, but he could be a great corner.

One last thing that I would like to point out before I direct you to the jump, recruiting map, and the rest of your day is the connection between Dame Julian (his preferential pronunciation, which also sounds like the name of a headmistress of a Georgian era woman's school) and a current Bearcat. Julian may have played his JUCO ball in California, but he is a New Jersey boy. He went to high school at Winslow Township in Atco, New Jersey and was actually in the same class with Reuben Johnson. You have to think that Johnson played some part in directing the staff towards his high school teammate. 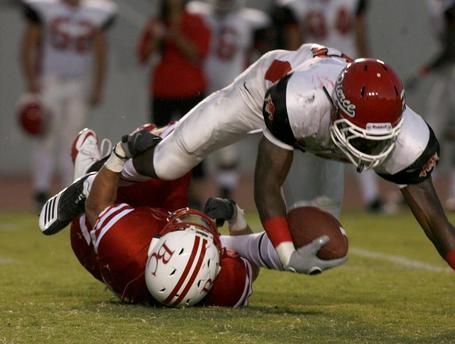