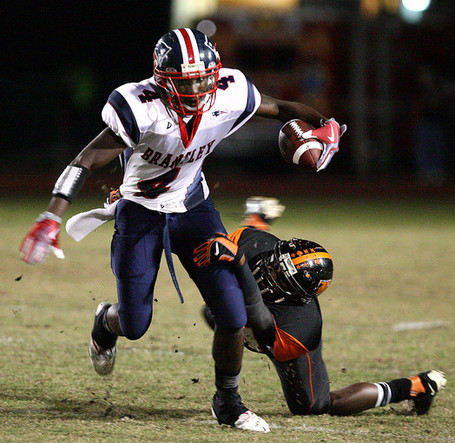 Ti'on Green becomes the first Orlando Area prospect to commit to the Bearcats in the 2012 class, and the 3rd Floridian to do the same. Green is evaluated as an athlete by most of the recruiting services, that makes it somewhat difficult to project at the College level. For Lake Brantley he is the B-Back in the Patriots triple option scheme. On defense he has played as a defensive back, but I don't know if he is athletic enough to play DB in college. What is clear though is that Green is a solid athlete with great speed and good short area quickness. If I had to take as stab at a projection for Green I would say Linebacker because he fits the mold of what UC likes from a linebacker. He might be undersized but he makes up for it by playing faster. Green is the first of the commits to become public, but I have heard that there was at least one other commitment this weekend.