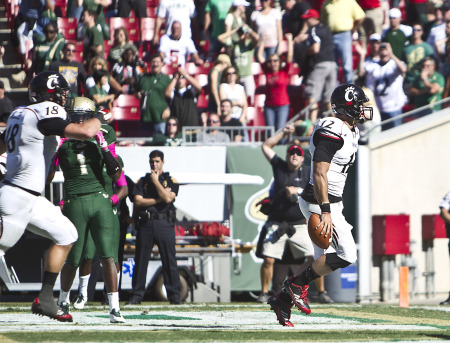 Collaros ran for two touchdowns and threw a 30-yarder to Alex Chisum in the decisive fourth quarter, which featured three lead changes and one big play after another on both sides. It was as exciting as you can get in-season, both teams trading their best shot. But when it counted most, it was Collaros rising up -- finishing with 389 yards passing, 21 yards rushing and five total touchdowns. What made his performance even more impressive was the way he came back from a subpar first half, in which he threw two interceptions and was 13-of-23 for 155 yards. One of the interceptions went into the end zone. The other was one of the ugliest passes you will ever see, as he tried to flip the ball out of bounds but instead it landed into a sea of USF players.

It's good that Zach can joke about that INT. But every underhand flip makes me want to throw the TV out of the window.

Cincinnati won an incredibly topsy-turvy game against USF 37-34 to take over sole possession of first place in the Big East and become bowl eligible to boot. A game that was poorly played in the first half turned into one of the most exciting games in the Big East this season. The fourth quarter alone featured three lead changes, none more definitive than the final drive that Cincinnati scored on to take the win.

Dominique Battle was lost in the first quarter of Saturday’s game against South Florida after he suffered a sprained knee attempting to defend against a BJ Daniels touchdown pass. His status for next week is up in the air.

Can you imagine if Cincinnati lost today? It’d be two weeks of – Fire Butch. Fire the defensive coordinators. Bench Zach. Back to Conference-USA. A one-yard run by Collaros was the difference between two weeks of jubilation and two weeks of negativity. Sure this team has a ton of weaknesses but lack of resilience isn’t one of them. The Bearcats, bolstered by veterans at just about every position, are a never-say-die team that will fight and claw until the clock hits double-zeroes at the end of the game.

After two lackluster showings, USF's offense traded punches throughout Saturday's 37-34 loss to Cincinnati. Junior B.J. Daniels led the way by throwing for a school-record 409 yards. They included a 10-yard touchdown to freshman Andre Davis that put the Bulls ahead with 1:27 left in the game.

"I was not willing to roll the dice, call the timeout with 15 seconds, try to run a drop-back play, take a sack and all the sudden, you don't even get the three points out of it," Holtz said after Saturday's 37-34 defeat to Cincinnati. "The decision I made at that second was, 'Don't get caught here without a point. Take your timeout. Kick the field goal. Make sure it's 10-10.' "

Two touchdowns were wiped out by holding penalties during the same drive, which ended with a field goal. A field goal — after failing to punch it in from the 3 — was botched when the snap went through the holder's hands. And USF allowed about 20 seconds to run off the clock just before halftime, surrendering a shot at the end zone to be sure of a tying field goal.

You can pick apart the decisions made Saturday by Skip Holtz, whose University of South Florida Bulls lost a lollapalooza of a football game, 37-34, to the Cincinnati Bearcats.

That is a strong phrase

University of South Florida sophomore Sterling Griffin, the team's leading receiver, left the game in the third quarter of Saturday's 37-34 loss to Cincinnati after injuring his right ankle, the same ankle he broke during offseason conditioning drills in the summer of 2010 that cost him all of last season.

The injury to Griffin was a turning point

"We came into this game with Sterling (Griffin) as a sophomore, Deonte Welch as a redshirt freshman, Andre Davis as a true freshman, Ruben Gonzalez as a true freshman," USF coach Skip Holtz said. "We've got three receivers out there playing as freshmen. … Those young guys really competed."

"Before the drive started, I went up to Zach and I told him, please, Zach, we need this game," Drane said. "I gave up a touchdown. Our defense put us in a hole. I told him, ‘C’mon, Zach, bring this one home.’ He’s one of the best quarterbacks in the country, if not the best. He knows how to win football games. He really needs to get some pub."

USF quarterback B.J. Daniels put on quite a show in a losing cause, passing for 409 yards and three touchdowns with no interceptions. He also ran for 54 yards and earned the respect of the UC defense. "He really knows how to make plays and extend the play," said UC cornerback Deven Drane. "It was a challenge to really contain him and be able to stay in coverage for as long as we did."

B.J. Daniels’ 10-yard touchdown pass to Andre Davis gave the Bulls a four-point lead with 1:27 remaining, but the Bulls failed to hold on in a 37-34 loss to Cincinnati before a crowd of 44,248 at Raymond James Stadium. Cincinnati (6-1, 2-0 in Big East) drove 70 yards in the game’s final moments and got the winning points on a 2-yard quarterback keeper from Zach Collaros with 12 seconds remaining.