Cincinnati Bearcats Football Back In The Human Polls, Out Of The BCS

Share All sharing options for: Cincinnati Bearcats Football Back In The Human Polls, Out Of The BCS 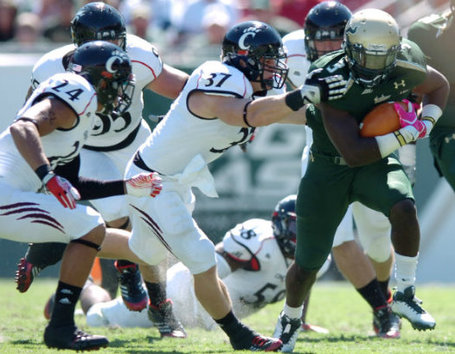 The Cincinnati Bearcats are back in the Football polls.  After this weekends win on the road against South Florida the Bearcats moved into the 24th spot of the AP Poll and the 23rd spot in the USA Today Coaches Poll. This is the Bearcats first appearance in either polls since the final editions of the 2009 season where the Bearcats were ranked 8th in the AP and 9th in the coaches poll.

However the Bearcats are not making their first appearance of the season in the BCS standings, primarily because the computers don't exactly love UC. The Harris poll does include the Bearcats though at number 24. Remember that the Harris is included in the BCS formula instead of the AP poll, which removed itself as an act of stroppy revenge for something or other. The BCS standings are kinda irrelevant for UC. Win the Big East go to the BCS, it's still that simple.