Rolling Through The Roster | 0 Jeremiah Davis

Share All sharing options for: Rolling Through The Roster | 0 Jeremiah Davis 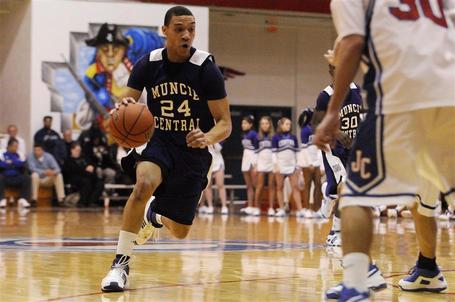 In 2010-11 Davis led Huntington Prep (Huntington, WV) to a 25-3 record and a #18 National Ranking according to Rivals High. With Huntinton Prep Davis played alongside one time Xavier commit, and current New Mexico State Aggie, Sim Buhllar as well as Ibby Djimde of Illinois. Prior to his stint with the Express Davis starred with the home town Muncie Central Bearcats. In 2009-10 he led Central to a sectional title averaging 16.3 points, 5.1 rebounds, 3.8 assists and 2 steals per game.

It is going to be interesting to see where Jeremiah Davis fits in with this team. He plays like a combo guard, which is fine in and off itself. But combo guards usually require the ball to be in their hands a lot of be effective, and I am not sure how much of it he is going to have. Davis is a good shooter, but not a killer. He can make plays going to the basket, but he isn't a devastating slasher. And so on and so forth.

The way I see it is that Davis has a broad array of skills, and he is bringing them to a team that already posses a well defined hierarchy and clearly delineated roles. I think that Davis is going to be a big part of the rotation early in the year. But as conference play approaches and the rotation gets pared down to 8 or 9 guys he will have to find a niche to be one of those 8 or 9 guys.