Film Study | The Return Of The Vertical Passing Game

Share All sharing options for: Film Study | The Return Of The Vertical Passing Game

When looking at the Bearcats offense this year there has really only been one complaint, and it is that UC has, for whatever reason eschewed the vertical passing game in favor of a more horizontally based one. The most controversial aspect of this shift has been the bubble screen which has drawn its fair share of ire so far in 2011. Personally I have no problem what so ever with the more horizontally based passing attack of 2011. There is more than one way to defeat a defense after all. Still the lack of big plays being made in the passing game has been something of a going concern to me. In 2010 Zach averaged 11 10+ yard completions per game, in 2011 that same average is 8.5. The same holds true with completions of 20+ yards, 4 per game in 2010 down to 3.5 per game in 2011. There are two caveats to those numbers, one is that Zach is averaging 7 fewer attempts per game, the other is that he is making (generally) better decisions, forcing fewer balls into traffic and hitting his check downs at a higher rate. That means fewer yards per attempt, but also fewer interceptions ect. Still for most of the 2011 season the Bearcats passing game has been very safe and conservative. But that changed in a big way Saturday when the Bearcats started to challenge defenses vertically once again.

When I did my Bulls primer I mentioned that the Bulls are a somewhat predictable defense.

In schematic terms the Bulls are very basic. Mark Snyder is part of the Jim Tressell coaching tree and approaches defense in much the same way. The main gaol is to prevent the big play and make the offense work the ball down the field in a very methodical way. Football to Snyder is a war of attrition.

The Bulls base defense is the 4-3 and they will seldom blitz. They might bring a linebacker here or there, but that is usually offset by a lineman dropping off into a zone. The most that I have seen USF blitz this year is 5 guys. In the back end they use a lot of cover two looks with a mixed bag of coverages underneath.

What that means from an offense is that based on down, distance and situation you more or less know exactly what the defense is going to do. That allows the offense to be aggressive, and aggressive the Bearcats were on Saturday.

The Bulls under Snyder are a predominately zone team. They do use some man schemes, but they always come back to zone shells, be they cover 2, 3 or the very occasional 4. All defenses have weaknesses, and the weaknesses of zone schemes comes in the flooding of zones.

When most people hear of flooding zones images like this will flash into your mind. Or they will if you have played video games extensively. That is possibly the most common example of a flood concept because it stretches the defense vertically and horizontally.

When you think about defense it is best to think of them in a graphical form. Defenses have to cover the field horizontally and vertically. A good offensive coordinator is always aware of this fact and will design passing concepts to work vertically or horizontally. For most of the 2011 season Mike Bajakian has been working defenses horizontally with the aforementioned bubble screens, stick, all curls ect. But Saturday Bajakian went vertical in a big way.

Here is the play drawn up against the defense that South Florida played. 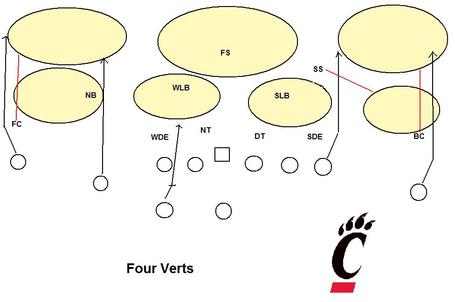 Against the defense that the Bulls played four verts is literally the perfect play call. The Bulls were clearly anticipating run, and with good reason. It is first and 10, and 1st down has been a run heavy down all season for the Bearcats. On top of that Isaiah Pead is lined up on the weak side of the formation which screams run to the strong side. The Bulls counter by moving safety Jerrell Young into the box gave USF 7 in the box against 6 blockers. Theoretically, before the snap, they have the advantage. But at the snap it is clearly a pass that the Bulls are not prepared for. The beauty of four verts in this situation against this coverage is that it stretches the defense vertically and horizontally. At the second level USF has 3 defenders to cover 4 receivers so someone is going to be open. The free safety can not cover two the two guys running up the Seams, he has to choose one, or none, and either way he loses. It is just up to Zach to find the guy uncovered, in this case Adrien Robinson, and get the ball to him.

And again the diagram of the routes versus the Bulls coverage. 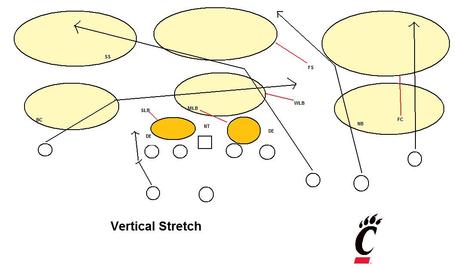 It's third and 19 UC for UC they set up with trips to the wide with D.J. Woods, Anthony McClung and Alex Chisum inside out and Kenbrell Thompkins outside. USF is in a 3-3-5 Nickle variant. This can be a blitzing defense but in this case the Bulls commit two of the three linebackers to spy on Isaiah Pead or Collaros in case of a run. In the back end they went with a cover three cloud. USF is set up to prevent the first down throw or run as it may be. If there is a weakness to the defense it is that the Field Corner and Alex Chisum are basically locked in one v one. The other person to watch is the free safety. He is responsible for the middle third of the field, so again it is one v one with Chisum and the CB. This is a good defense but it can be beaten if that outside receiver goes and makes a play. The reason that I am breaking down this play is that this is a perfect example of a reasonable deep shot. This isn't a play where the concept is going to pop a guy open like it did in the example above. This is basically a 50/50 shot where Chisum will either catch it or not, but the odds of a catastrophic play like an INT are reasonably low. And those are the kind of shots that Zach Collaros should be taking.

The offense on Saturday looked like vintage UC. Zach Collaros threw early and often threatening and challenging the USF secondary down the field. It almost looked like 2010, but there was one key difference, and it speaks volumes to Zach's continuing maturation, and Mike Bajakian and Butch Jones understanding of their personnel. Those guys took their shots, but with the exception of the INT's Zach made great decisions in terms of picking his spots to push it vertically. Zach didn't do that much last year, he pretty much just let er rip. By simply picking his spots Zach's INT rate has gone from throwing an INT every 27.4 attempts to one INT every 33.3 attempts, and needless to say it is a big reason why UC is winning.