Rolling Through The Roster | 2 Octavius Ellis

Share All sharing options for: Rolling Through The Roster | 2 Octavius Ellis 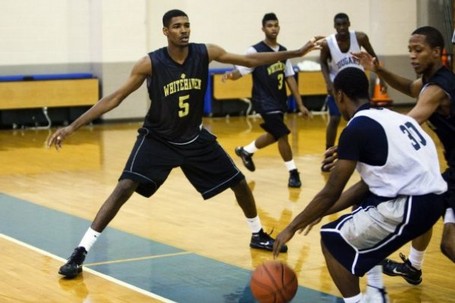 Ellis spent 2010 playing for Whitehaven High School in Memphis. He averaged 15 points and 10 rebounds per game as a Senior after posting 16.8, 7.8, 2.2 blocks and 2.1 assists as a Junior. Ellis is still extremely raw in terms of his technical abile ity. He has loads of athleticism, but he his development has been sporadic. He has only been playing competitive Basketball on a consistent basis since the 8th grade. That fact I think shows up watching him.

I expect Ellis to get a red shirt in 2011. Much like Kelvin Gaines before him I think that Ellis would benefit greatly from having a year to get bigger and stronger physically and to continue to develop his skills against what is going to be a major step up in competition. Ellis played at around 180 pounds in high school. He is now listed at 210 pounds. While that is better, I don't think it's enough to hold up in the Big East. Beyond the Basketball side of things I think that having a year to adjust is going to be very important for Ellis. After taking the red shirt Ellis should be in good position to compete for one of the starting forward spots in 2012-13