Cincinnati Bearcats Recruit Round Up | Week 11

Share All sharing options for: Cincinnati Bearcats Recruit Round Up | Week 11 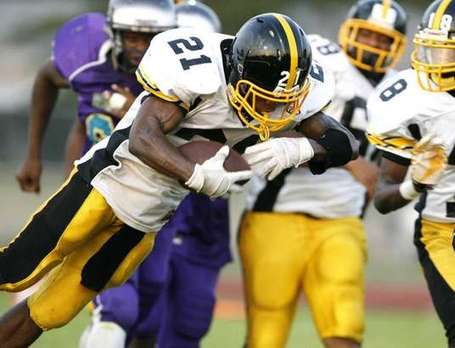 LaSalle 17, Elder 14 // Cincinnati.com
Ryan Leahy and the Lancers ended the year on a positive note beating Elder at the Pit. However the bad news is that their seasons is done. LaSalle wound up just on the outside of the playoff picture, winding up 10th in Region 4.

Cleveland Heights slogs its way past Maple Heights, wins Lake Erie League championship - cleveland.com
Maple Height's and UC recruit Jeremy Graves saw their 23 game win streak snapped by Conference foe Cleveland Heights. The loss drops them Mustangs to 8-1 on the season. Maple Heights will be playing in the playoffs next week as the finished 3rd in Region 6 and will match up Tiffin Columbian.

One muddy massacre // Troy Daily News
Marcus Foster and the Troy Tojans rolled Sidney upping their record to 8-2 on the year. The Trojans are playoff bound and will head East on Interstate 70 to the Columbs where they will be matching up with Upper Arlington next week.

Colerain 40 Oak Hills 14 // Cincinnati.com
The Cards rolled to their 9th win of the season with a dominate offensive performance. Andre Jones came up with his 7th pick in 10 games, that figure leads the Greater Miami Conference. Colerain wound up 2nd in Region 4 and will host a first round playoff game with Walnut Hills.

Madeira moves to 10-0 with 49-21 rout of Wyoming // Cincinnati.com
Kyle Williamson and the Mustangs rolled to an undefeated season beating up on Wyoming. The win clinched the Mustangs first conference title in Football. Ever. The 1st in 71 years of Football. Once again it was a dominant running game that got the job done for the Mustangs. Maderia will host a playoff game next week against CHCA.

Central continues dominance // MiamiHerald.com
The Miami Central Rockets beat up on neighborhood rival Northwestern and Errol Clarke played a big role in denying Northwestern an appearance in the playoffs for the first time since 1991. Clarke had a sack, interception and forced fumble in the course of the night. Central moves to 7-0 and will play Belen Jesuit for the district title next week.

Football: Brandon 48, Plant City 36 // St. Petersburg Times
Plant City went down for the first time in 2011 losing to Brandon 48-36. The Raiders trailed 21-0 at halftime and 35-0 in the third quarter before Bennie Coney caught fire in a comeback attempt. Coney finished the night 19 of 42 with 329 yards, 5 TDs and 2 INTs. The Raiders are in a three way tie in the district with 1 game to play.

Southridge 21 South Dade 7 // Miami Herald
Joey Jones and the Bucs had a rough go of it Friday getting outgained 306 to 113 yards en route to a 14 point defeat at the hands of district foe Miami Southridge. The loss dropped SD to 5-4 on the year, (1-3) in the district.

Lake Brantley fumbles its way to victory, beating Lake Mary 35-20 // OrlandoSentinel.com
Undefeated Lake Brantley claims the Class 8A, District 4 and Seminole Athletic Conference championships. Brantley is currently ranked third in the state of Florida in the 8-A class. Ti'on Green had 218 yards and 4 TD's on 28 carries. Video here.

Dominant win for First Coast over Raines // jacksonville.com
One week after beating longtime district nemesis Bolles Ey'Shawn McClain and Ken Bynum suffered a major letdown against First Coast. The Vikings who entered the statewide polls this week will now fall right back out of them. The Vikings are still in position to host a playoff game. But the game against First Coast, uber talented though they may be, has to be a bit deflating.

Warren Central 61, Tech 14 (Video) // fox59.com
Warren Central rolls once more and will face Carmel in a matchup between the top two teams in Indiana.

Carmel tops Lawrence Central, to face Warren Central // The Indianapolis Star
Kevin Brown and the Lawrence Central Bears went down to Carmel 35-14. The Bears end the season with a 9-2 mark.

Grand Blanc survives wild 59-52 triple-overtime football playoff game against Holt // MLive.com
Lester Liston and the Grand Blanc Bobcats clearly know the name of the game in playoff football. Survive and advance, and they did just that. Liston played a crucial roll in the goal line stand that provided the scoring margin.

High Schools | Dennis Norfleet, King run over Grosse Pointe South // The Detroit News
Dennis Norfleet accounted for 4 touchdowns on the day, three rushing and one on a kickoff return in a dominating 46-7 win for King. Norfleet toted up 265 yards rushing on the day and the Crusaders advance to the second round of the playoffs where they will face Allen Park.

Mitchell storms back to win game and district title // The Commercial Appeal
Nate Cole and the Mitchell Tigers won their final regular season match-up against Hillcrest. Cole was victimized by the Vikings on a strip and score that put his team down 12-0 with just 64 seconds left in the 3rd quarter. Cole responded and caught the game winning score between two Hillcrest defenders. Tennessee starts the playoffs next week and both Bearcat recruits from the Volunteer state will be in action.

How the Dandy Dozen fared and Memphis-area roundup // The Commercial Appeal
The Memphis University School won a contest with Briarcrest 26-10 to bump their record up to 7-3. The playoffs begin next week but the Owls will have a bye before wading into action in two weeks time.

Riverwood 44 Grady 26 // AJC.com
It has been a bad two weeks for John Law and the Grady Grey Knights. After rolling to a 7-0 start Grady has been beaten soundly in each of their last two contests. They are going to enter the playoffs on a two game skid.

Penn Hills 14 Woodland Hills 10 // Pittsburgh Post-Gazette
Shakim Alonzo had a the only TD of the day for the Wolverines, a 32 yard TD reception to open up the scoring. But Penn Hills got the last laugh eking out a 14-10 decision.