The Bearcats Receivers Are Inconsistent, And I Have The Numbers To Prove It

Share All sharing options for: The Bearcats Receivers Are Inconsistent, And I Have The Numbers To Prove It

On the heels of the 2010 season there was precisely one proven commodity among the Bearcats receivers. D.J. Woods finished second in the Big East in Yards, 3rd in TD's and 4th in receptions. The common assumption heading into 2011 was that DJ would simply step become the next in the line of stellar receivers stretching back to the 2007 season and the rise of Dom Goodman.

Seven games in it is safe to say that just won't be happening this year. Woods is currently tied for 2nd in receptions with 29, 3rd in yards with 329 and tied for 2nd in TD receptions. Part of the issue is that UC is throwing the ball less, much less, 7 fewer attempts per game compared to 2010. Fewer attempts equals fewer catches available, the logic of that should be inescapable. But there is something else at work here, namely that Woods, and the receivers in general haven't been exceedingly consistent. Check out the season totals for targets, and most importantly catch percentage, after the jump.

Woods and McClung are the two most targeted players, they are also the most inconsistent receivers on the team and both have had their own bouts with the drops this year, McClung in particular is doing his best Braylon Edwards impression dropping easy balls one down and making impossibly clutch catches the next. Overall the distribution of targets this season looks basically like you would expect it to. The starting trio have been targeted on 71.3 of all passing attempts. 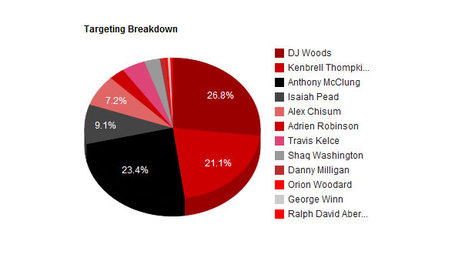 If I would like to see one thing in the last five games of the year I would be more involvement for Alex Chisum who has been very good since the N.C. State game. He isn't flashy but he is dependable and has a knack for jump balls. The other thing I want more of is Adrien Robinson and Travis Kelce in the passing game. This year they have combined for 12 catches, 223 yards and 4 TD's which is already more than UC got from the TE position in all of 2010.

Note: If you are really that curious you can find the game by game targeting data here.