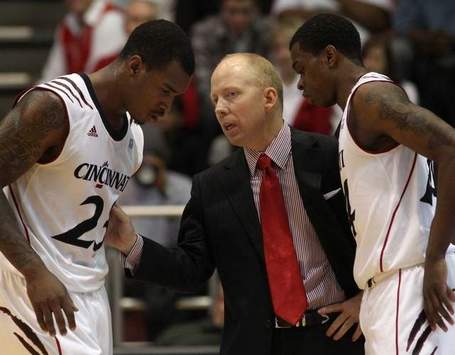 UC lost this game for two reasons and two reasons above all. 1) this team is not nearly as good defensively as they were a year ago. Rashad Bishop is a bigger loss than I anticipated heading into the year. The problem is not on the interior of the defense. Yancy Gates is a better defender for the most part, and Justin Jackson and Cheick Mbodj are gifted defenders. The problem is on the perimiter. The simple fact of the matter is that UC's crunch time rotation of Cashmere Wright, Sean Kilpatrick and Dion Dixon there is nary a stopper among them. That's a big problem for a defense that is set up exclusively to prevent the opposition from getting into the paint. The Herd waltzed their way into the lane with impunity for most of the game.

2) Marshall made all the effort plays tonight. They crashed the boards with relentless abandon enroute to a +13 rebounding margin +5 on the offensive end alone. They simply cared more and played harder than UC did. The twitterific venom directed at Yancy Gates in the aftermath has been something to see. But it is misplaced to put this just on him. None of the "leaders" played well today. Dion Dixon was absent for large stretches, Yancy is Yancy he doesn't have a leaders mentality, and never has. Statistically Cash played one of his best games, 7 points, 10 assists, 0 turnovers, but his overall impact on the game was negated by questionable decision making.

Its not yet time to give up on this team or this season. But UC clearly working through some things in the early season. The the identity that they hung their collective hats on last year, one of effort, energy and hunger clearly doesn't apply to this years group. But they don't have anything on hand to replace it, which is needless to say a problem. UC has talent and Mick Cronin is a good enough coach to figure it out going forward. That is not to say that I haven't considered the deeper, darker alternative that the season is teetering on a knives edge needing just a little push to send it all spilling over the edge. But it is way too soon to declare, definitively, that such a moment is neigh. There are still 26 more games to be played. All that is definitively known about this team is that they are capable of putting 5 minutes of fantastic basketball together followed immediately by 5 minutes of horrendous basketball.