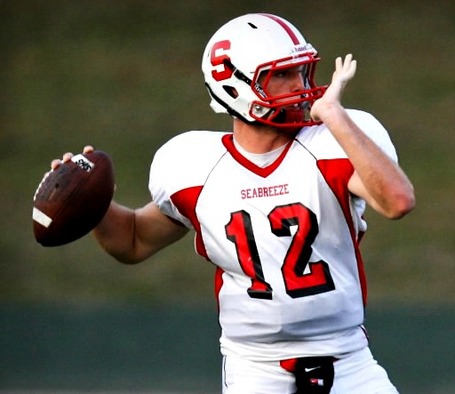 Follow Down The Drive onFacebook/twitter and check out the store.

Full disclosure, I am late on this story. I haven't had steady internet access in about a week, and in the time that I did have internet you might have heard about the massive fight that broke out. That has been a real time hog.

So last Friday Norvell announced that he was switching his commitment from Marshall to Cincinnati. The locals are not too happy. Norvell was a long time commit to the Herd, commiting back in April. He has been looking around and has taken visits to USF and obviously UC. A home visit from Butch Jones appeared to seal the deal.

"The coaches came in and that definitely sealed the deal," Norvell said. "That’s when I knew."

UC has been looking for a second QB in this class for a while now. I had been going on the assumption that WIll Gross of Memphis would be the second guy. But Gross tore his ACL and apparently UC backed off. From a UC perspective Norvell has one big thing going for him, he will be on campus in just three weeks time because he is graduating early from Seabreeze High School.

In terms of a comparision to Bennie Coney I think that Coney has a bigger arm and more athletic ability. Norvell has an edge in terms of accuracy. I suspect that both will be given a chance to put themselves in the race for the starting job during the spring, though I expect one to be redshirted.